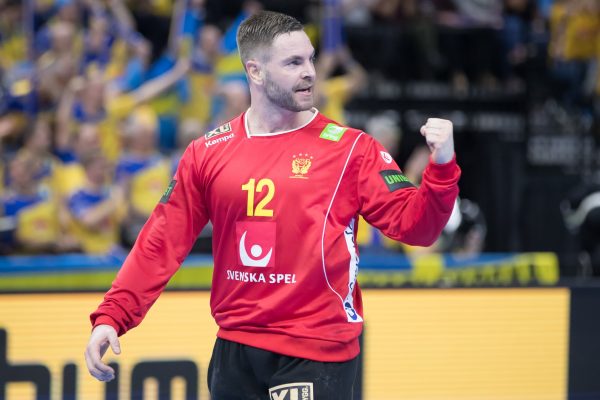 With a brilliant Andreas Palicka on goal, Sweden defeated Argentina 31-16 and are group leaders with two victories in two matches on group D in Copenhagen.

European runners-up obtained their second triumph on this championship after beating the South American champions 31-16, with a superb performance from Rhein Neckar Lowen’s Andreas Palicka. Sweden had the better start and were leading 3-0 until Santiago Baronetto scored Argentina’s first goal after 6 minutes of play.

Argentina was showing its best version in defense, accompanied by a good first moments from Leonel Maciel, and managed to establish the equalizer through Manuel Crivelli at the 14th minute (6-6). Despite suffering a few 2-minute suspensions, Sweden were able to take the lead with three uncontested goals from Lukas Nilsson, Mattias Zachrisson and Jerry Tollbring (11-7) with 8 minutes left on the clock. Palicka was already making it hard for the Argentinians, who were struggling to keep up the level and the first period ended 15-10 in favor of the Scandinavians.

Left back Guillermo Fischer quickly scored the first goal of the second half, but Sweden netted 4 times in succession to extend the lead to +8 (19-11) after only 7 minutes. This caused Manolo Cadenas to call Argentina’s last time out. The coached by Kristjan Andresson continued to step on the gas pedal and broadened the gap through fast breaks, mainly caused by Palicka’s infallible performance. The difference was now unsurmountable for the South Americans, who were losing by 13 after 18 minutes (26-13). It took them exactly ten minutes to score again, it was Federico Fernández, from the 7-meter line, who scored Argentina’s 14th goal.

A rotation was seen on both squads, who started to think about tomorrow’s respective matches before the final buzzer at the Royal Arena in Copenhagen. The final score was 31-1; Palicka, who finished with a 53% of saves (16/30), was chosen as player of the match. Zacchrisson and Federico Fernández were top scorers with 6 goals each.

Sweden, who are now group leaders with 4 points, will meet Angola on tomorrow’s match, while Argentina will have a tough task against Egypt, who have lost both of their matches.

Federico Fernández, top scorer for Argentina, explained the reasons behind today’s big loss in Copenhagen: “We had planned a different kind of match, to be honest. On the first half things worked out on the attack, somehow; but our defense, which is usually our best phase, didn’t work, we lost too many easy 1 against 1 and so this defense, which sometimes gives us some air in attack, didn’t quite work. We struggled a lot in attack, almost the entire match, and when we did get to a clear scoring chance, their goalkeeper saved everything. So, this might have been the match that we were supposed to lose, and now our target is tomorrow’s match against Egypt”.

HP: Do you think that Palicka’s performance messed with your game?

Fernández: -Well, I think what I reproach the most from today’s performance is really our defense. When we play against teams like this, the attack is really what we struggle with the most, historically, because we don’t have long range shooters, so it’s very hard for us. So if I have to point out something it would be the defense, they nearly run over us today, we could never figure them out and so that’s there the main difference relies. So now our focus is on the upcoming matches, we have three finals ahead of us and we need to win at least two if we want to advance to the main round.

Sweden’s Kim Andersson also shared his thought’s after today’s victory: “We were prepared for a really tough game, we have some really big talks on how we were going to play against their defense, especially. And also in attack, we really don’t know what happens, but they are very fast on changing directions and we are maybe a little bit bigger and taller than the guys from Argentina, so we were prepared to play a really fast game and in the start we tried to play a solid defense and we did, and then Andreas (Palicka) also had a great game and it was a nice victory for us”.

HP: What are the aspirations of this Swedish team in this championship?

Andersson: –Well, this is only our second game, we have three more games ahead in this group to see who eventually goes to the main round. We have to be prepared for everything, tomorrow we play against Angola and we know that if we don’t prepare they can surprise us, now we have to close this game and try to focus on the next one as we have short time between the games.