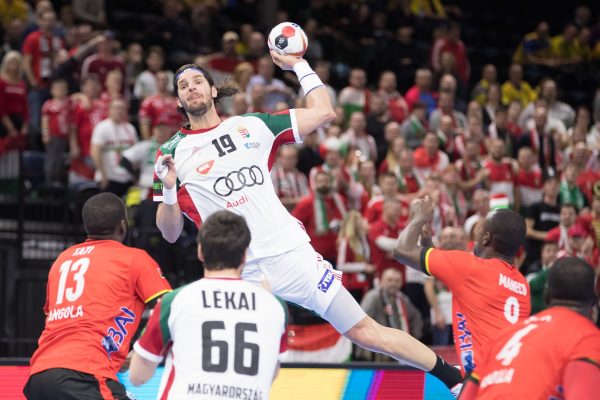 A spectacular win on the opening match against Qatar may have given some hope to the Angolan team for their second encounter of the tournament against Hungary. But the European team, who had drawn against Argentina on the first match, proved too strong from the beginning. The team conducted by Itsvan Csoknyai and Vladan Matic took the advantage early in the match and after 14 minutes, they were leading 9-2.

Hungary’s tough defense was key to create some problems to the African attack, which had trouble reaching the goal defended by Roland Mikler. With 5 goals, Bendeguz Boka was the top scorer of the first half, but he saw a red card at 21 minutes after touching Angola’s right wing Otiniel Pascual in mid-air. The goal difference was shortened to 10 right before the buzzer by Rome Hebo (18-8).

Angola continued to struggle on the second half of the match, but never backed down, despite the power displayed by the Hungarians who were comfortably leading 21-9 after 4 minutes. The coaching duo of Hungary rotated the players on the last 30 minutes and the squad were able to keep their rivals in a safe distance. The last 20 minutes of the match were a goal exchange, with a visible improvement from the African, but with the European dominance was never at risk. The final result was 34-24 for the Hungarians, who have collected their first victory and are leaders of the group with three points, until tonight’s match between Sweden and Argentina is finished.

The top scorers of the match were Boka (Hungary) and Edvaldo Ferreira (Angola) with 5 goals each, while the player of the match was Veszprém’s goalkeeper Roland Mikler.