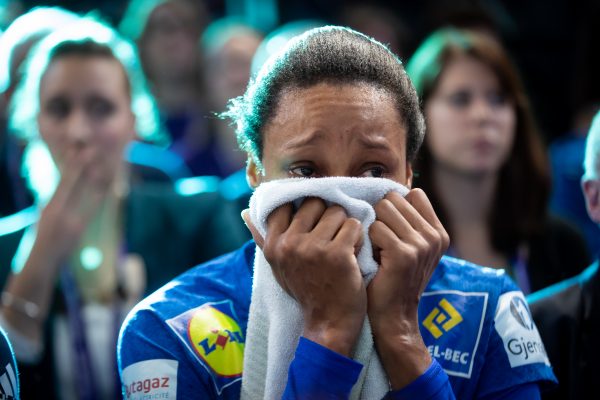 It was the turning point of the match. Allison Pineau was in tears, sitting on a chair behind Laura Glauser’s goal. She had just been disqualified, tears were uncontrollable and she would hide her face on a white towel as minutes went by. She missed nearly the entire second half of one of the most important matches in the history of the women’s national team of France.

Moments before the match was over, she stood up and moved slowly closer to the bench. She ran with to her teammates after the final buzzer filled the AccorHotels Arena and burst into tears again. But in the mixed zone, after the euphoria, medal hanging on her chest, she took a moment to answer our questions.

-What was the most asked question today?

-Thats’s a good question -she said as she laughed.

-How do you feel, probably?

-(thinks) I don’t realize. I feel tired, but I feel so proud. I feel so proud of this team, this staff, this is unbelievable. We just…wrote history. We are the third team in the history who took the double title, it means so much. And it shows that it’s not easy at all to do it. A European championship is the hardest title to get, we’re home, so it’s really hard to describe what it means, but it means so much.

-How did the support of the crowd make you feel when you were disqualified?

-And how hard was it for you to be sitting out there?

-I think there were soooo many emotions at the same time…I was crying, I felt so disappointed…it was not fair and very frustrating because they stole something from me…a final, at home, in my home town, in front of my family and my friends. I just hope that they will apologize and realize that they did a big mistake. Even it we won this game, it could’ve been in a different scenario.

-When you look at the medal, and think about when you were little, did you ever imagine that you would be here today?

-I wish. I wished that when I was little. Because I always wanted to be professional, I just didn’t know which sport I would choose. But it’s amazing to remember where I came from, and…all the way up (laughs), until here.

Sitting on the media tribune it was hard not to move along the song the organizing committee chose to present the players before each match. Beyoncé’s ‘Crazy in love’ might have been too tempting for some players on a moment when their concentration had to be at its highest. The question had to be asked:

-How was it for you to enter the court when they gave you the medals, with that Beyoncé song and you were finally able to relax to it?

-Yesss, to get relaxed! To say: ‘aaaaaaaah! Damn it! We did it!!’ It was amazing, amazing, it was much better than on Friday, I think the crowd were warmer and it was how we expected, so thank you, thank you very much!