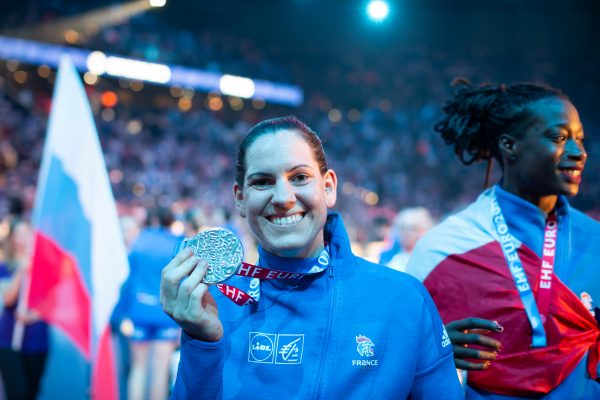 The tattoo on her left leg gave her away, you could see it underneath the panels that divided the mixed zone. It took her a while to get to the written press are as everyone in that place wanted a piece of them after all. Alexandra Lacrabere looked tired but happy, in ways she wouldn’t be able to describe afterwards.

The powerful right back praised the French defense as one of the keys for this new title for ‘Les Bleues’. In a fluent Portuguese, she declared.

-Right after the semifinal you mentioned that you had to make sure Anna Vyakhireva couldn’t play freely, how did you put that in practice today?

-She couldn’t play because we did what we said we would do. We stepped out and did not let her run. And also (Daria) Dmitrieva, who played very well on the first half, but then we we able to stop her and…this team is freaking good, because we have a very, very, very good defense. And then Amandine had a great last minutes in the match, and in attack everything worked today.

-Many mention that the French defense is the best in the World, do you think your attack is being overshadowed by it?

–I don’t think so, I think we still have to improve on the attack, we need to work to have a better attack. But we have to be focused on the defense, because if we won a World championship, and the European championship today, is beacuse we have a good defense. You can’t win if you don’t have a good defense, you can score 40 goals, but if you receive 42, then you’ll loose.

-Looking back to when you were little, did you ever imagine this present, being European champion or World champion?

-(pauses and thinks) In 2007, when the World Championship was played in France, I underwent a shoulder surgery and I was on the crowd crying because I couldn’t play. And I remember thinking the only thing I wanted was to have a World Championship or European championship at home again, so this is a dream come true.

-And how does it feel exactly?

-I don’t even know how to feel. I still have the feeling that we’ll play again tomorrow, although my body is so tired right now! Now we have to think about the Olympic Games, we’re gonna win that gold and then I’m done.

-And how do you reach this end of the year physically? Do you think maybe the schedule is too busy?

-Well, we have a match scheduled for the 30th of December, it’s ridiculous. But it is what it is…if the French team is so strong is beacuse we play lots of matches on the different championships, on the French league, and we also have the national team training phases. We need to make the most of all of the matches we have, this is our job and we train to win.

Yesterday, France qualified for the Tokyo 2020 Olympic Games. We’ll see what Lacrabere has to say in a little less than two years time; but for now it’s time to celebrate France’s first ever European title.