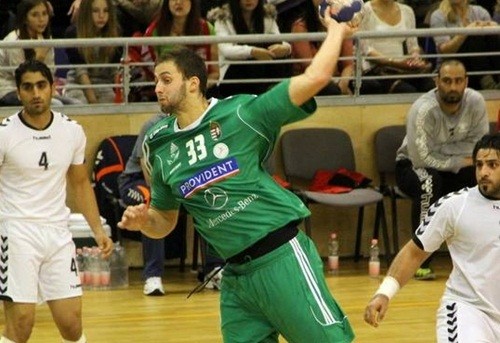 The Provident Cup of four nations (Hungary, Belarus, Czech Republic, Poland) was held in Hungary between 3-5 January as preparation for the upcoming European Championship.

On the first day Hungary met the Czech Republic. In the first 15 minutes Hungarian defense didn’t work well, Jícha and Horák scored many times, Petr Stochl produced some great saves and the guests obtained a 4-goal lead (15th minute 5-9). For the final 10 minutes Hungary came closer thanks to goals from Lékai and Ancsin.

In the second half powerful play and six goals from Gábor Császár propelled the Hungarian team but even this and 3-3 goals by Mocsai and Szöllősi weren’t enough to defeat the guests led by Stochl and Horák. After exciting final minutes the Czechs won the match.

The other match of the day: Poland-Belarus 28-29

On the second day Hungary dominated from the start against Belarus, where only Rutenka was able to score for a long time. Pick Szeged’s right-back Ancsin and Császár scored mostly and by doing so Hungary’s lead grew constantly until the end of the first half (17-11).

The hosts kept on playing well in the second half and even managed to increase their lead to 8 goals where a blackout came. Suddenly the guests lead by Rutenka came awfully close (22-20) and local spectators were getting more and more nervous. Fortunately for Hungary Lékai and Mocsai were able to switch the whole team into higher gear. The end game was still tight but Hungary’s victory was not in danger in the end.

The other match of the day Czech Republic.-Poland 23-31

There were many changes in the Hungarian team for the final day of the tournament, however they still managed to play well for the most part of the first half. Máté Lákai and Ancsin were especially good, Pick’ s right-back was an equal substitue for injured superstar László Nagy.  Hungary were in front until the 25. minute but after a short shutdown in attack the Polish team changed the result to their favour.  Pivot Syprzak and shooters Jurkiewicz and Lijewski were very effective and as a result the guests obtained a 3-goal lead by the end of the first half. (12-15).

The home team managed to equalize in only 7 minutes (16-16) but they were stopped by great saves from keeper Wyszomirski thereafter. Hungarians were unable to keep Syprzak while Lijewski kept on shooting effectively and the final 10 minutes started with a 4-goal Polish lead. Hungary’s play fell apart and the Polish team won the match easily.

The other match of the day: Czech Republic-Belarus 32-30

Final result of the Provident Cup: