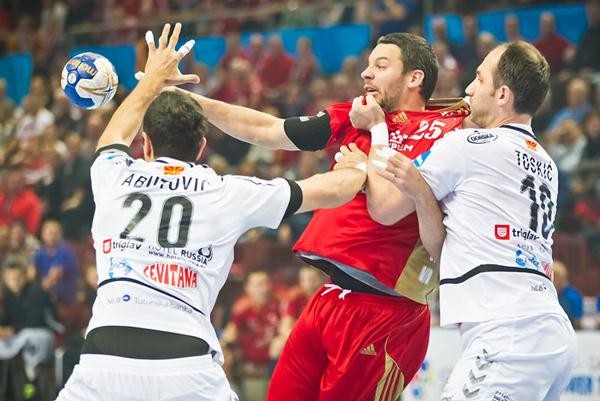 SEHA Gazprom League’s derby between Veszprem and Vardar ended 24:24 (12:12) draw with Dibirov scoring last minute goal to tie the result and bringing Macedonians an important point. Two candidates for League’s trophy have both showed great performance proving their top European quality. Now there are no more teams with 100% winning ratio in the League.

‘Red and black’ were eager to show classy performance after two defeats against PPD Zagreb and Meshkov. Dibirov and Dujshebaev were along with Milić leading guests to +3 after little more than 15 minutes.However Laszlo Nagy and remarkable Mirko Alilović were there to step up for home team reducing the gap until 12:12 after 30 minutes.

Veszprem have opened the second half better but Vardar did not allow them to enlarge the difference. In the end Slišković scored an amazing kempa goal on Marguč’ assist for 24:23 with Dibirov leveling it all up with a tough shot.

Flying Russian was in the end best scorer for guests with 7 goals and in Xavi Sabate’ team Laszlo Nagy netted 8.

I think coach Sabate is doing a great job in Hungary. We’ve played well, in the first half we were better, but Veszprem have managed to come back in the end. Remarkable match for us in an arena in which it is so hard to play.

This game was special because there were many players coming from international duties from all around Europe. We’ve had only one training and I can say I’m pleased with our performance. There were a few moments in which Veszprem was playing better but I’m sure it was an entertaining match for fans.

Congrats to Vardar, they’ve played very good. They have a top coach in Europe. Vardar is a candidate for the EHF CL FINAL 4 and SEHA League. I would like to congratulate my players.  Both teams played very well, our defense was very good. We made some mistakes because they are very fast and they had some fast-breaks as well. At the end of the game, we had a chance to win but we missed, and Vardar could also win, but they could not do it either. That’s is sport. I want to congratulate László Nagy for playing so good after his injury. He is a big leader of the team and I think he is the best player in the world. I would like to thank fans for supporting us.

Congratulations to Vardar. They are growing as a team, they have a big chance for the Final Four both in the Champions League and SEHA League. It was an entertaining match because it was a really close game. The draw is a fair result.