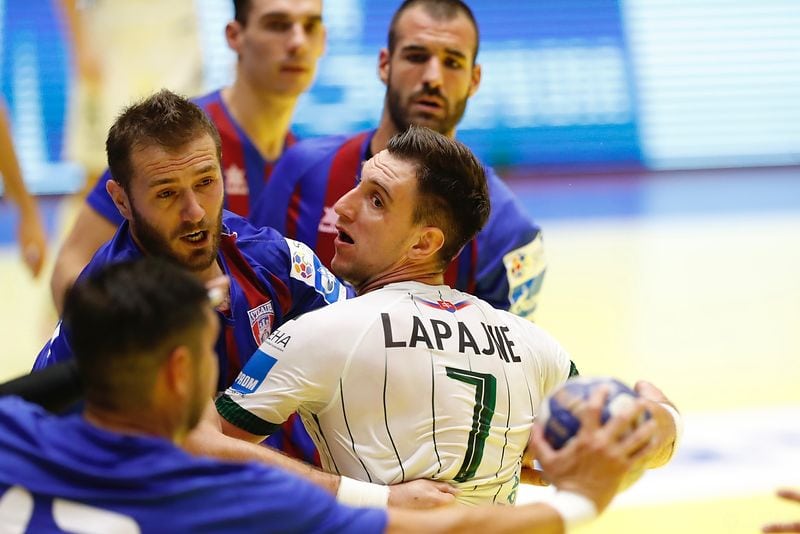 Steaua Bucuresti have opened successful the new chapter of the club’s history in their first ever match at SEHA Gazprom League. The Romanian vice-champions beat HC Tatran Presov 26:25 (11:16) after exciting turnover in the second half in front of home fans at Polivalenta hall.

Aggressive defense of Tatran, the team coached by Croatian coach Slavko Goluza, made the difference in the first half. Very solid zone of a Slovakian team helped goalkeeper Chupryna (6 saves) to save some important shots and allow some easy goals which put visitors in front after 30 minutes of the clash.

Since Steaua’s playmaker Stefan Vujic goal for 5:5 in the 10th minute, Romanian team were constantly in minus due to poor offensive performance. Tatran managed to make 4:0 series before half-time break to leave the court with +5 – 11:16.

Domestic team was eager to show better face in front of the home fans at SEHA premiere. They did it with stronger defense on Tatran’s back line Urban – Lapajne – Butorac, who had a lot of problems to find the net in the second half.

After only five minutes of the second half, Slavko Goluza was forced to call time-out to help his team staying in the lead (16:17). They managed to do it, but only two minutes before the end, when Steaua made a spectacular turnover with goals by Krsto Milosevic and Alin Rosu, which put home team two goals up (26:24).

Lukas Urban scored his third goal to give a chance to Slovakian team 60 seconds before the final buzzer (26:25), but despite chance in the last attack to level the final score, Tatran stayed without points in Bucharest.

Alin Rosu was TOP scorer of the match with seven goals followed by Nemanja Grbovic and Javier Hummet with four each. On the other side, Jakub Hrstka and Martin Stranovsky (5/5 from 7m line) led Tatran with six goals each.

RK Vojvodina Novi Sad presented a furious performance against national rival RK Zeleznicar 27:20 (13:10) at “Cair” hall in Nis at the start of SEHA Gazprom League season 2018/2019. The Serbian champions played one of the best matches in the club’s history of competing in regional league to ensure first three points at the start of the eighth season.

From the very beginning of the match, defensive block with experienced Goran Trkulja and Dusko Celica supported by outstanding Svetislav Verkic between the posts, was the main force of seven-times Serbian champions.

Vojvodina’s youngstars Milic and Nikolic made a lot troubles to home team in attack afterward RK Zeleznicar’s coach Veselin Vujovic decided to call time-out  (5:9, 15th). His reaction didn’t change approach and level of self-confidence of his team, who stayed three-four goals down until the end of the first half (10:13).

Vojvodina’s goalkeeper Svetislav Verkic (18 saves in total) continued to built solid advantage of his team with numerous saves during second half. Home team made the smallest gap on 13:16, but play 7 on 6 wasn’t a good solution as visitors scored three goals in “empty net” until 46th minute, when Verkic netted his first for 14:22.

It was obvious that home team had no strentgh to get back in the match. Fans at “Cair” could see total domination of visitors until the end, who had +10 six minutes before the final buzzer – 16:26.

Nikolic, Grozdanic and Celica scored five goals each for the winners, while Spasic and Sretenovic were on the helm of home team with same number…