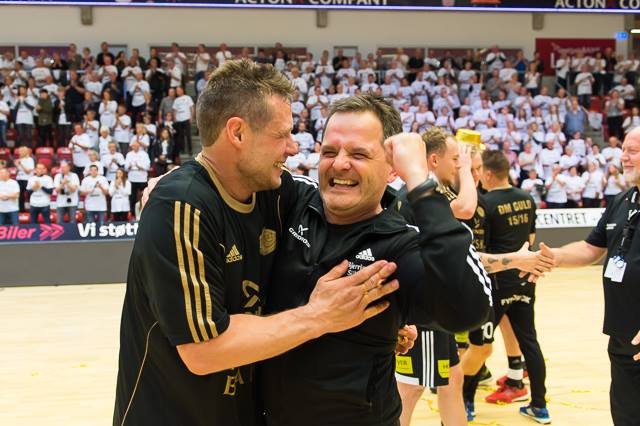 The match of “outsiders” in VELUX EHF Champions League Group A Kadetten Schaffhausen and Bjeringbro Silkeborg, but also clash of two Danish coaches, Peter Bredsdorff-Larsen and Lars Walther is scheduled for tonight, 20 hrs in BCC Arena.

The Swiss and Danish champions are in really strong group so points in the direct encounter are more than important for their future in European elite competition.

– I know Lars as a great person, who during the last many years has worked his way through international handball. He has had many exiting assignments in Germany, Poland, Slovenia, Romania and now Switzerland. He is used to work in unusual environments and under unusual conditions – said Peter Bredsdorff-Larsen about his colleague Lars Walther, who also has nice words for his compatriot:

Coach of Danish team knows that will be hard to reach TOP 16:

– We are pleased about the highly attractive group A, where we look forward to many big games for our team and our surroundings. On the court, we hope of creating the big upset that it would be, if we qualify for the Last 16.

Lars Walther put the ambitions of his team in range of Silkeborg’s:

– Our objective is quite similar to Bjerringbro-Silkeborg’s, I think. We want to get a hold of the sixth and last spot in the Last 16. For it to happen, we have to deliver a couple of upsets, but that is our plan. We take it one game after the other and hope, that we can create the upsets.

– Kadetten Schaffhausen has to be the favourites on their home court in Switzerland. Then you can say, that we are the favourites, when we in March play in Denmark. They have a large number players on many positions with a lot of experience from international matches both in the VELUX EHF Champions League and from the national teams. Especially their wings, the goalkeeper Nikola Marinovic and the centre back Garbor Csaszar are very experienced. We prepare ourselves for a game on a high physical level. We must play our very best in order to get the win in Schaffhausen, but it is my expectation, that especially our defense can create some troubles for Kadetten Schaffhausen.

Lars Walther had fantastic achievements in all the countries where he worked, Poland, Romania and Switzerland (in all three he won Championships with Wisla Plock, Baia Mare and Kadetten). He wants a step forward on the international level: