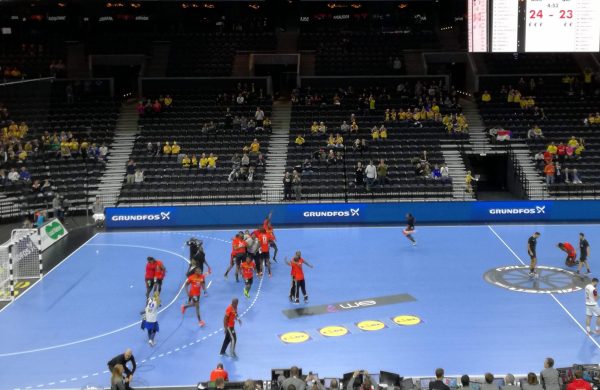 Angola have shocked 2015 IHF World Championship finalists Qatar after winning 24-23 on the last second of the match in the opening match of group D in Copenhagen. The African team had lead nearly the entire match, but was only able to win it on the last play in a fast break.

There were not many spectators early today at the Royal Arena in Copenhagen, but the hundreds who were filling the seats got to witness a very exciting match between two of the non-European nations of the group. Angola dominated the first period, displaying a very dynamic attack and an intense defense; they took the lead early in the game, after 7 minutes they were 4-1 ahead in the scoreboard.

While they had some difficulties in defense at times (they suffered 4 2’ suspensions), they were able to stay ahead; while many might have thought that the lead was only temporary, they kept their advantage and went to the locker rooms 12-8. Goalkeeper Giovany Muachissengue closed the first period with an outstanding 61% of saves (11/18).

The first few moments of the second period saw Qatar catching up and Angola’s coach Filipe De Carvalho Cruz called a timeout with only 2’46” on the clock as they were now leading only by one (12-11). The timeout seemed to pay off and the Africans took another 4-goal lead after 10 minutes (17-13). However, a few mishandlings of the ball and the appearance of Daniel Saric on goal helped Qatar finally catch up and tie the match 17-17 four minutes later.

Given the status of ‘underdog’ against the 2015 IHF World Championship finalist, Angola won the support of most of the crowd in the arena. Their stamina gave them enough power to continue to face a troubled Qatari team, who nevertheless managed to be in front in the scoreboard after for the second time on the match, as they had scored the opening goal (22-23 in 56’).

The last minute of the match were beyond exciting. De Carvalho Cruz called a timeout with one minute left to be played and with the clock ticking again Rome Hebo scored the equalizer with 22 seconds left. Qatar’s last possession could’ve given them the triumph, however, Rafael Capote’s last shot was saved by Muachissengue and, on the fast break, Claudio Chicola beat Saric to give Angola their first victory on the tournament, for the delight of the fans at the Royal Arena.