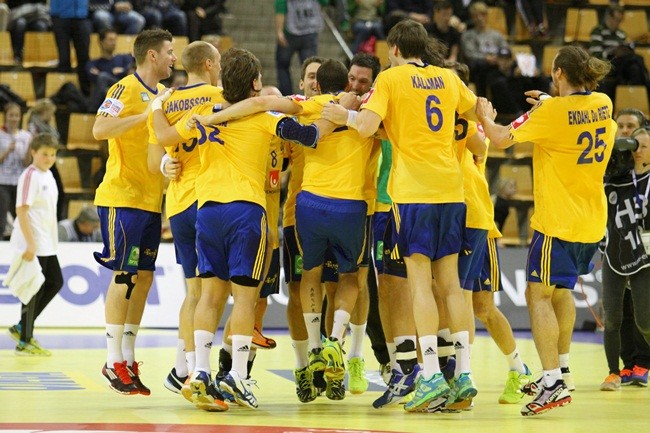 In this duel between the two tradition-rich teams, it was Sweden that came on top in the end 29:27, but only after a spell of bad performance due to many mistakes made after a confident first half, which led to complacency mid-way through the second half.

The first half of this match saw a tie at 15 minutes in, with Žitnikov the scorer of an equalizer for 8:8. It was the closest Russia came to Sweden in first 30 minutes, as the Swedish team set the difference to 4 goals by the 20 minute.  It seemed like it was all over for Russia when Jakobsson set the score to 11:19, five minutes until the half hour-mark. Sweden was head and shoulders above any level Russia could set with their players Evdokimov and Igoropulo, who were good but not good enough to match rampant Sweden in the first half. 13:20 the halftime score

The second half of this thrilling match was a real struggle for Sweden after having a huge drop in performance. After the ‘yellow-blues’ came back from the dressing room to finish the job, they looked a completely different team. In the first 20 minutes of the half Sweden was lackluster and steady declining in performance as Russia was melting down the lead, goal by goal. It was the 50th minute of the match in which Evdokimov leveled the score for Russia for the first time,to heroically mount a stunning comeback to make up for 7-goal difference.With 7 minutes remaining Atman puts Russia in a leading position as the ties the score once again after a strike from Ekdahl Du Rietz.

Žitnikov brings Russia the first lead, with 6 goals for Russia without reply. Levishinkept Russia’s hopes alive and well with 9/18 key saves, all of them being key to maintain the current score.

Lindren and Olsson couldn’t do much but remain calm, calling the time-out as Sweden was 13 minutes without scoring in the second half with a goal to catch.

4 minutes to go with Sweden still shorthanded as the score is tied at 27 all.

Sweden back with the one-goal lead in the last minute, courtesy of Karlsson, as Russia pulls the goalkeeper out in a bid out to outnumber the Swedes.

Ekdahl DuRietz was unstoppable for tired Russian defense allowing Petersson to score for from the penalty for what will be the final scoreat 27-29, as Gorbov came in with a goalkeeper’s bib on to try and take something from this match. Andersson kept a late effort from the Russian best player tonight, Igoropulo (11 goals) to claim the win, as the Swedish fans who came in great numbers to Aarhus today can have a sigh of relief as their team will save points tonight.