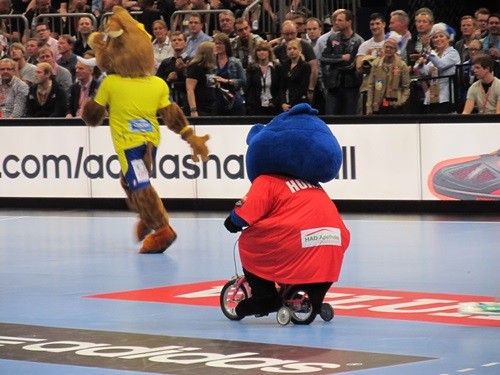 To celebrate the return of the biggest handball club competition this week we present a guide to this season’s Champions League, the key actors and stories. Most games will be broadcast freely on www.ehftv.com.

Main storyline: German clubs have won the competition in each of the last three seasons, including an all-Bundesliga final in 2013/14. At the same time, Eastern Europe is strengthening its challenge in the form of Hungarian champions Veszprém, Polish champions Vive Tauron Kielce, and Macedonian twins HC Metalurg and HC Vardar. Which trend will prevail in 2014/15?

Outside bet for the title: Paris Saint-Germain

FInal standings of the groups:

Group A 1. THW Kiel – With arguably the most star-studded backcourt in the history of the game, the challenge for coach Alfred Gislason will be how to keep Filip Jicha, Domagoj Duvnjak and co. all happy at the same time
2. Paris Saint-Germain – After last season’s massive disappointment, expectations are somewhat downgraded for the richest club in the world, despite the addition of French Olympic champions Thierry Omeyer, William Accambray, Xavier Barachet
3. HC Metalurg – The Macedonian champions will rely on the best home court advantage in the competition as they target a third quarter-final appearance in a row
4. Naturhouse La Rioja – Spain’s second team added experienced players in the hope of improving on last season’s fifth place finish in the group stage
5. Meshkov Brest – Back in the group stage for the first time in seven years, the Belorussian champions added a number of Balkan players with Champions League experience in the hope of being competitive 6. HC Zagreb – The eternal Croatian champions can draw on their country’s best young players, but a lack of pedigree will likely count against them in a tough group

Group B 1. Barcelona – Having been shockingly defeated in the last two Final4s, coach Xavi Pascual and his star-studded team are running out of excuses
2. Flensburg-Handewitt – The defending champions lost a couple of key experienced players and replaced them with youth, but would you count against Ljubomir Vranjes’ team after last season’s miracle run?
3. KIF Kolding Kobenhavn – Experience is the name of the game for the Danish champions, who will be targeting a place in the quarter-finals at least
4. Orlen Wisla Plock – Plock keeps losing games and key players to domestic rival Kielce but should comfortably make it out of the group stage
5. Alingsas – Sweden’s new champions rely entirely on domestic players and do not appear to have the quality to compete with the continent’s top teams
6. Besiktas Mogaz – Somewhat of a surprise qualifier, the Turkish champions are here mainly to gain experience

Group C 1. Veszprém – The Hungarian champions have added a number of world-class players to an already strong squad, and will be looking to build on last year’s Final4 appearance and go all the way this time
2. Rhein-Neckar Lӧwen – The Lions have focused on quality by letting a large number of players leave and replacing them with a small selection of newcomers headed by Danish goalscorer Mads Mensah Larsen
3. HC Vardar – Having narrowly missed out on a place in the Final4, Vardar brought in experienced players and will be expecting to do better than last year
4. Montpellier Agglomeration – Having lost its dominant position in France following a betting scandal in 2012, this current Montpellier team is a couple of steps below the top European sides
5. Chekhovskie Medvedi – Russia’s eternal champions return after a one-year absence caused by financial hardship
6. Celje Pivovarna Lasko – Having lost virtually every key player from last season’s team, the record Slovenian champions have been done no favours by being placed in a tough group

Group D 1. Vive Tauron Kielce – Talant Dujshebaev’s reign in charge of the Polish champions started with the team crashing out of the Champions League last season, but expectations remain high for a Final4 run in the legendary coach’s first full season in charge
2. Pick Szeged – Strong additions and an easy group should encourage the reigning EHF Cup winners that they can make a run at least to the quarter-finals
3. Aalborg – Having lost two of its star young players to the German league, Aalborg would be happy with just making it to the second round
4. Dunkerque Grand Littoral – France’s shock champions have been handed a favourable group and must improve on their last-place finish in 2013/14
5. Motor Zaporozhye – A run to the second round last year shows that you should not underestimate the Ukrainian champions, but a repeat may not be on the cards
6. Kadetten Schaffhausen – Swiss champions Kadetten are back after a year absence and would be looking to sneak into the second round