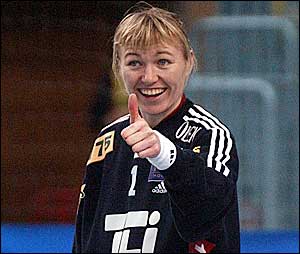 One the best goalkeepers of all times, Cecilie Leganger (39), has decided to end her career, which was announced on her clubs website on Monday, Larvik. The Norwegian which was admired by handball fans for two decades, after lots of trophies, medals and awards, has decided to end a career which set new standards in handball and inspired generations around the globe.

She had lots of main roles, victories and awards even more. Leganger was World and European champion with Norway, and has even more medals, including the Bronze at the Olympic Games in Sydney. She won Champions League three times, two times with Slagelse, and once with Larvik. It was the only CL trophy for a Norwegian club at the same time. She was voted the best goalkeeper at four World Cups and two European Cups. MVP at the World Championship 1993. Voted best goalkeeper and handball player of Norway of all times, and IHF voted her the best in the world in 2001. After Slagelse had financial problems, she went on to play for Larvik:

– “I’m happy to have played few additional season for Larvik, but my body is no longer young to be able to sustain lots of training. My experience from the medicine says that I should say “good bye” now that I feel well and still have pretty good health. It is enough.”