Nikola Karabatic about Qatar 2015: We come to Doha to win the gold! | Handball Planet 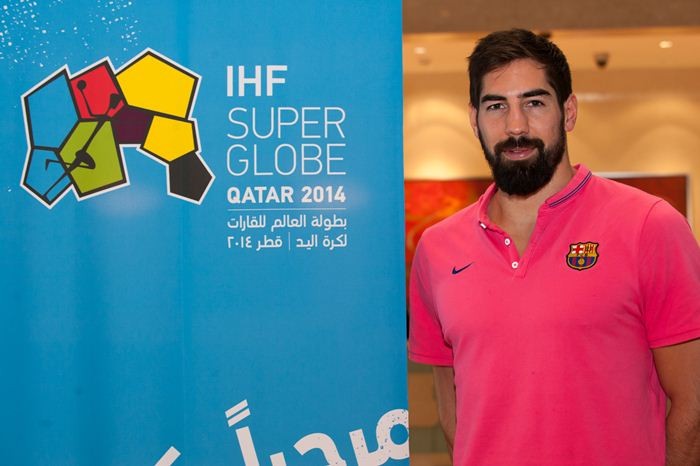 One of the best handball players of the decade, Nikola Karabatic (30) talked exclusively for the www.qatarhandball2015.com about handball in Qatar, his anticipation of the 2015 World Championship in Doha and his hopes and dreams for the upcoming season.

Congratulation for your second straight trophy at the IHF Super Globe. Did you expect to be successful with FC Barcelona in Doha again?

Nikola Karabatic: At first I have to say that the IHF Super Globe was a brilliantly organised event with handball on the highest level. I believe we were the best team and took the trophy well-deserved, but all non-European opponents gave us a hard fight in a great arena.

In January you will return to Doha with the French national team for the 2015 World Championship. What are your general impressions on the preparations of the pinnacle event?

Nikola Karabatic (smiles): At first I hope that in January the temperatures are a little bit lower than now. Qatar has deserved to organise this World Championship. They invest a lot in sport, in handball and in the infrastructure – and they even invest outside their country to develop handball and sport as the sponsor of the Paris St. Germain team or by the sports channel beInSport, located in Paris too. The arenas in Qatar are brilliant, the accommodation for teams is exceptional, the Qatari people show a great hospitality. So my biggest hope for the organisers is that they manage to have full arenas throughout the whole World Championship, that they can activate fans from all over the world – as then we will see a perfect tournament.
France are currently reigning European and Olympic champions, but missed a chance to defend their World Championship titles 2009 and 2011 titles when getting eliminated by Croatia in the 2013 World Champions quarter-final.

Can France make it to the top again in Doha?

Nikola Karabatic: Indeed, it’s our clear goal to win the gold medals again in Qatar, as it’s been our target for years to be on top of all competitions. Between 2008 and 2012 we took nearly all available titles: at the Olympic Games, World Championships and European championships. In January 2012, when we played a really weak European Championship in Serbia, missing the semi-finals, a lot of people said: ‘The Golden Generation is dead, it’s over for France.’ Seven months later we were gold medalists at the London Olympic Games. In January 2013, when we lost the World Championship quarter-final in Spain, again they declared the French team for dead. So it was interesting so see all the reaction after we had played an extra-ordinary 2014 European Championship including beating host Denmark in an extra-ordinary final. So you see the tides turn quite fast in international handball. We will prepare intensely for Qatar 2015 and hope to go all the way.

Q: But you don’t have to become World Champions to qualify directly for the 2017 World Championship, as France is the already qualified as host and organizer…

Nikola Karabatic (smiles again): This is true, but, at first it is the dream of every player to become World Champion, even if you had been it before. And second: Qatar 2015 is the first qualification event for the 2016 Olympic Games in Rio. And if we take the trophy in Doha we’ll have already booked the ticket to Rio – is there any greater motivation?

Q: The roster of the French team changed in the previous two years. Was it hard to integrate all those young players in your fully rehearsed squad?

Nikola Karabatic: Definitely not! We have five, six youngster who are part of our team now like my brother Luka, and ValentinPortes, who already have key roles on our team. Of course it was not an easy task, but thanks to our former team mate Didier Dinart, who now is our defence coach, they were integrated perfectly in the way we defend. And in attack we do what the French team always does: The experienced player discuss and implement the tactics and teach it to the young ones. Our success at the 2014 European championship proved that this system is working.

Winning titles and trophies with the national team is one part of your handball life, the other is playing for the most successful ever handball club on earth. How would you describe your first season at FC Barcelona?

Nikola Karabatic: I’m absolutely happy and proud to be part of this team and this club. I arrived in Barcelona to win titles I had not won before – and I managed it in my prime season: Spanish champions, Spanish Cup winners, IHF Super Globe winners. Now I have won all most prestigious trophies in the world of handball. I have to say that the team made it very easy for me to become part of it. We have a great atmosphere in our team, on and off the court. I really settled fast and easily – and feeling how fast the first season passed by proves to me that it was the right step to join Barcelona.

But despite winning all Spanish competitions and the IHF Super Globe, you and your team missed the great goal to become winners of the VELUX EHF Champions League. How did you and your team mates cope with the incredible semi-final defeat against Flensburg after being ahead by six goals with only eight minutes to play?

Nikola Karabatic: To be honest, everybody had to cope with this defeat on his own. Right after the VELUX EHF FINAL4 tournament in Cologne, we all spread to our national teams and then everybody had his summer holiday. Now we are all back together, but we only look ahead and not behind at what has happened in the past. We are aiming for great goals again in the next season. And luckily we have the chance to face Flensburg twice again very early in the group phase of the Champions League.

So making it to Cologne again and to fight for the Champions League trophy again is the main goal for you on club level?

Nikola Karabatic: This is the most important and the most prestigious title you can win and thus we aim for it every year. But this season it will be harder than ever to make it to the final tournament. Some years before it was clear before the start of the season that Kiel, Barcelona and Madrid would make it there, the only open question was who would be the fourth team to qualify. This season the quality of the clubs has increased tremendously and so the number of clubs who have the chances and the ambitions to make it to Cologne has increased in the same way. It’s not only Kiel and Barcelona anymore. The group of high potentials includes Veszprem, Vardar Skopje, Kielce, Paris, Flensburg. To have so many contenders for the title will produce an exciting and thrilling season, the competition will be much more interesting as the level of performance is higher than ever.