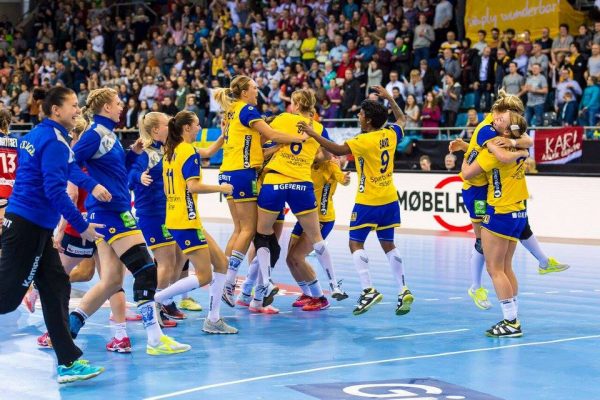 The ladies in yellow were the better team last night against Norway and they took the two points and the leadership of the group B in Bietigheim-Bissingen after beating them 28-31. Sweden will now face Slovenia in the eight finals and the Norwegian will face Spain. Both matches will be played in Arena Leipzig. Also, Hungary finished third after defeating Czech Republic 29-30.

“They won the fight, they had nothing to loose, everything to win, and they showed that they are a good team. They’re underestimated by everybody. But they are a very strong team and they were better than us in fighting, in winning duels both in attack and in defense, I wish them good luck in the eight finals”. Those were the words of Thorir Hergeirsson as he opened the press conference. In a match that changed leader many times during the 60 minuntes, it was Sweden the one that had the last laugh.

It was a tight match, from beginning to end. In a frenetic start, Isabelle Gulldén opened the scoreboard, followed by Johanna Westberg, it was 0-2, but in less than a minute, Norway caught up through Stine Skogrand and Camilla Herrem to set the 2-2 after 2:17 of the game. With three minutes left for the end of the first half, Nora Mørk scored her 8th goal to set the maximum difference there was in the entire match, it was 18-14 for the coached by Hergeirsson. Sweden was able to reduce the gap and went to the locker room losing by two: 18-16.

On the second period, Sweden scored three goals in a row on the first minutes to take the lead again (18-19). Kari Brattset tied the match, but Gulldén stole a ball and put her team up again with a fast break goal. This action forced Hergeirsson to request the second timeout of the match. From then on the lead changed hands a few times and after 18 minutes Norway was in fron again with a +3 on the board (27-24). But three minutes later they would score their last goal of the match (28-26). With nearly 8 minutes left, Signell called a timeout. And when the match resumed Sweden scored 5 unanswered goals that gave them the victory in one exciting game. The top scorers of the match were Mørk and Gulldén, both with 9 goals, the Swedish was named MVP.

“I’m very happy and especially very proud of my team who really believed in it, to beat Norway you have to believe it 100%, but still it’s not today’s game that counts, it’s the eight finals. Now we will go home and talk about how to take this victory with us in a positive way. It’s a good feeling to win against Norway, especially mentally, but it gives us nothing more than just a good feeling. We will carry on and take that good feeling into the next game”, confessed Henrik Signell, who couldn’t hide a smile on his face.

In contrast, Amanda Kurtovic’s feelings were quite summarized: “There’s nothing more to say than we lost to the better team today”.

Left wing Louise Sand scored the last goal of the match with only one minute left on the clock, but she couldn’t quite describe the moment: “I can’t express my feelings, when I get so happy it all goes blank and I don’t know what to do!”. The Brest player agreed with her coach that one of the keys for the victory was not necessarily tactical or physical: “the game plan was to believe 100% that we could beat Norway and we did. The key was that we played like a team, in every position, we backed up each other all the time and we believed in it”.

Hungary beat Czech Republic and finished third on the group

In the other match from group B, Hungary had a rough fight against Czech Republic and they defeated them 29-30. The coached by Jan Basny were having the lead after 20 minutes (11-7) with a great performance from Marketa Jerabkova, but Hungary turned it around with 6 unanswered goals (11-13). The first half finished 14-17 in favor of the team captained by Anita Görbicz, who did not play any minute of the match.

On the second half Hungary continued to have the lead, and although the Czechs fought back and tied the game after 11 minutes (21-21), 4 unanswered goals gave Hungary more room to build the victory. In the end the effort from Basny’s girls was not enough and the match finished with a one goal difference.

“Today we weren’t far away with the result, but I hope we will see better results in the eight finals”, expressed Jan Basny at the press conference. Kim Rasmussen was a bit more eloquent and said: “I have very big respect for what they have built up, it’s a very strong, solid team that just keeps going, so I knew it would be a tough game. We’re very happy with the victory, I’m happy about how we fought, I’m happy about how we came back on the first half from 7-11, and now the championship really begins, and we are ready for this”.

Both Hungary and Czech Republic will be in the eight finals. The Hungarians will face France while the Czechs will meet the first from group A, Romania.