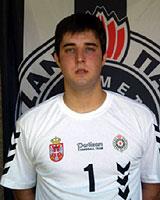 Former Serbian NT goalkeeper, Tomislav Stojkovic (27) joins Polish team Gaz-System Pogoń Szczecin. Team of Szczecin struggling to find a form this season and currently is 10th in the League of 12 teams. The first goalkeeper got injured, so from Stojković’s transfer expectations are high. Stojković has played for Serbian champion, RK Partizan, RK Vranje and spent some period in Israel, where he was between the posts in Rishon.

He won gold medal at the Mediterranean Games in Pescara 2009 with the Serbian NT.