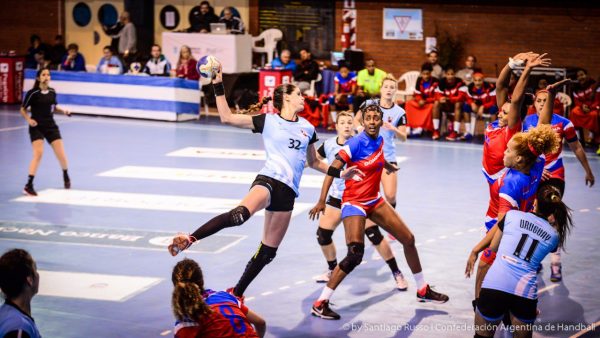 Uruguay gets their second victory and climbs to the top of group B. Puerto Rico defeated Colombia and dreams of the semifinals of the tournament.

On the third day of the competition Uruguay obtained their second victory, this time against Dominican Republic, with a final score of 31-23. In a match that was far more intense than that of yesteday against Guatemala, the conducted by Silvana Renóm struggled during the first minutes of the match, but were able to establish a safe goal difference after the first 20 minutes of the encounter and finished the first half with a 16-8 advantage.

Dominican Republic, which had already experienced tough losses against Chile and Argentina, were able to surpass the 11 goals scored on the first match, but they weren’t enough to overcome a very concentrated Uruguayan team that has climbed to the top of group B and tomorrow they will face Chile. Another victory would get them closer to secure a spot in the semifinals.

On the second match of the day, Puerto Rico struggled one more time, but took their second win against Colombia by 30-21. In a match that was marked by the two minute suspensions against the conducted by Mónica Ospina Orozco, the Central American team took advantage of the tecnical fouls commited by their rivals. The first half was very tight and the Colombian could’ve tied the encounter, but lost the ball on the last attack; the score was 13-12. Only three minutes into the second half, Puerto Rico stretched the difference to 16-13 and after 12 minutes, they had already stepped on the gas pedal to become nearly unreachable for the Colombians. A high effectivity from the wings, fast breaks and good connections with the pivot were some of the high points of the coached by Camilo Estevez.

“We’re not used to defending not attacking against teams that have our same height, we had a different plan so it was difficult for us to adapt to their attack, to their game with the pivot; but during half time our coach talked to us and we made a physical effort and now we want to rest. We’re not thinking about the final score at this moment, but rather about the two points to finish second in the group”, confessed left back Sheila Hiraldo after the match.

The objective of finishing second is a realistic goal cosidering that they share the group with Brazil. They’re aware of that and that’s why they will try to secure the other spot available for the semifinals. Hiraldo then addded: “I think that we can use the tiredness under which Paraguay will be under after today’s match against Brazil. All of the teams want to make a good game against them and they will all give all they have to play against players who are professionals in Europe, who play Champions League, so I think we could use that”. Regarding the game plan that they will have to implement against Paraguay, the left back states: “We’re a little impatience, and I think patience will lead us to moving the ball a little bit more, and the pivots will be able to run on the line, so we’ll work on that 2 against 2. I know they’re bigger and stronger than us, but I know we’re faster and I think that our speed will help us there. Our goal is to finish second and go to the semifinals, and then of course to qualify for the World Championship for the second time in our history”.