Brazil and Argentina with one foot on the semifinals | Handball Planet 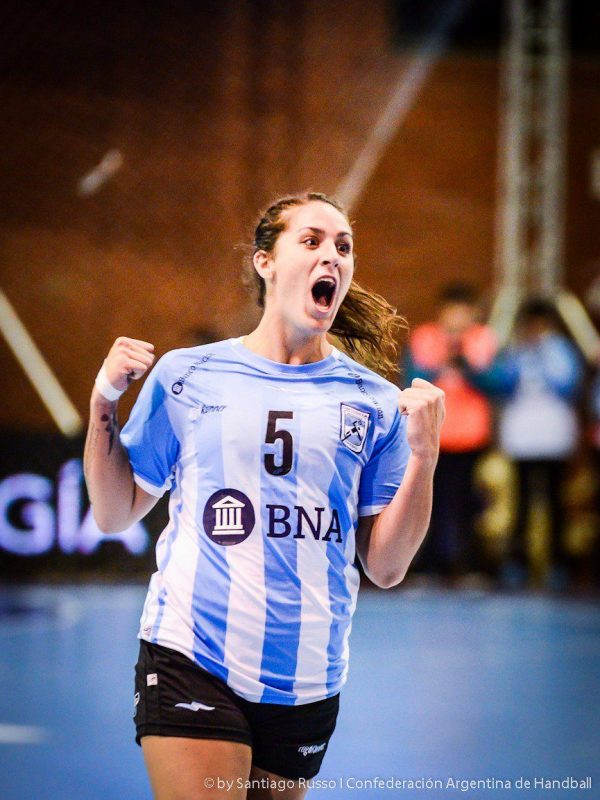 “Guerreiras” and “La Garra” have won all three matches in their group and are one win away from securing a spot in the semifinals. Both teams are favorites on the competition that is being held in Buenos Aires.

In a crowded stadium, Argentina obtained their third victory by 19-26, this time against Chile, a much more complicated team than those of the first two presentations. The home team showed character against a fighting Chilean team that complicated their rivals during the first half of the first period. The conducted by Ignacio Aniz Legarra had the better start and took the lead (5-3) 12 minutes into the match, their mobility was hard for the Argentinian defence to control. The panorama changed with after some adjustments in defence, the help of Atlético Guardés’ goalkeeper Marisol Carratú, and the entry of the new addition of Bera Bera, left back Elke Karsten. With two goals and one assist she helped Argentina take the lead and from then on, they never let go of it.

While the gap was still short, the Chileans chose to attack with seven court players, but the tactic failed as two lost balls transformed into two goals with an empty goal. The difference was now 6-10. The first half finished with a score of 9-13. On the second half, Chile took advantage of Argentina’s imprecisions, but the efforts were not enough to turn the match around. The advantage was mantained until the end by a very focused Argentinian team who will have a day off before the match against Uruguay, which will very likely define the top of the group.

“It was a tough match, the Chileans were faster than the Guatemalans and Dominicans, so it took us a while to adapt to that. We did good in defence, although we let them take some long distance shots, and that will be a problem for the future matches. But now we have to focus on staying down and not to be too far from the area for the upcoming match, that will be against Uruguay”, expressed Argentina’s left back Manuela Pizzo. The new addition to Spain’s Rocasa Gran Canaria also said: “the open defence made us struggle today and that’s something that Uruguay also does, so we have to try and play more often with the line players that should come out to receive”. Argentina has won all three matches played so far and is one step closer to the semifinal, which they could secure tomorrow if Uruguay defeats Chile.

An unrecognizable Brazil stepped on court last night and had a really bad time trying to bend a very mobile an persistent Paraguayan team, but in the end they took a victory by 15-29. The former World champions started off 3-0 down and it took them 28 minutes to tie the match. The Brazilian squad looked a bit upset after a few calls from the referees and that, in addition to some lost balls due to bad passes, some very good interventions from goalkeeper Aracelli Estaque and a patient, collective and incisive game, allowed Paraguay to lead on the scoreboard for almost the entire first 30 minutes. The tie came on the 28th minute, through a goal from left wing Samira Rocha and with less than half a minute for the final whistle, Jéssica Quintino established the 12-13 in favor of the team coached by Sergio Graciano.

On the second period the efforts from centre back Marizza Faría and the contribution of line player Sabrina Fiore were keeping Paraguay in the match, but Brazil had patience to find their way to the goal, despite the struggle, and after the first 12 minutes they stretched the goal difference to 4 (13-17). The handling mistakes from the Paraguayans allowed the defending champions to run the fast breaks and extend the lead which became unsurmountable for the conducted by Neri Ruben Vera.

“We were a bit deconcentrated, especially in defence, we made lots of mistakes, so we need to fix that. Because of the fact that we’re implementing a new system, it’s taking us a while to adapt to it and to catch the pace to make the changes of marks on time, but it’s good that this happens now and not on the following games, which are the most important. Also we were a little bit nervous to shoot against the goal and their goalkeeper did very good. But once we fixed the defence a little bit, and we started to press a little bit more outside things went well”, expressed Mayara Fier de Moura after the worked victory. Brazil has a total of six points after their third triumph and they’re steadily moving into the semifinals.

Argentina and Brazil will have their day off and the matches of the day will be as follows (local time):

All matches can be followed on this link: http://www.tycsportsplay.com/eventos.php?id=17