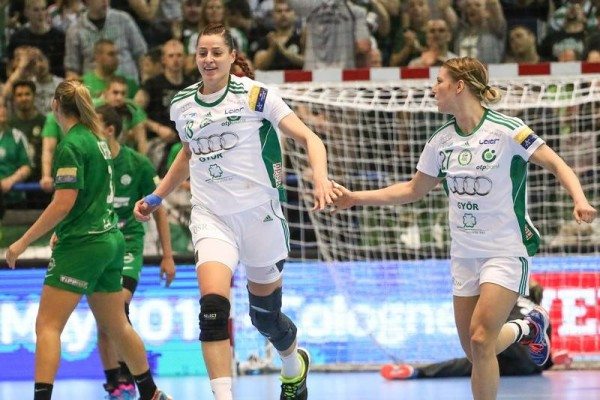 This upcoming weekend, the four best teams of the season will fight for the title of European champions in Budapest’s Papp Lazslo Sports Arena. The Hungarian powerhouse Györi Audi ETO KC, who are back in the Final 4 after a year absence, will count on two players that have been nominated for the all-star team of the season.

The Dutch centre back Cornelia ‘Nycke’ Groot and Brazilian left back Eduarda ‘Duda’ Amorim took some time to answer some of our questions, in the eve of the most important weekend for women’s handball in Europe.

Handball-Planet.com: You have just won the Hungarian Cup, did you have time to celebrate it?

Nycke Groot: We had a dinner with the team, but of course we save the celebration for later, because we have some important matches left.

Eduarda Amorim: We jumped from one objective to the other. We’re now getting ready for the weekend.
H-P: We’re just a few days away from such an important event as the EHF Final4, how do you feel right now physically and mentally and how does the team feel?

NG: I feel really good! This is what we have been working so hard for all season, so we feel ready!

EA: I’m feeling good, happy to be able to play a new Final 4. We’re confident, we had a fantastic season. We survived big problems throughout it and now we’re close to conquering what we wanted the most. We now have to focus to finish in the best way.

H-P: Did the workload increase these past weeks due to the proximity of the Final4 or are you still having the same training plan?

NG: We’ve had some important matches up to the Final 4 for which we have been focussing on, so the trainings have been pretty similar.

H-P: You crashed FTC in the quarter-finals knockout. Did you expect such a big difference on the scoreboard before playing that phase? Were you surprised after that?

NG: No, I didn’t expected that. I thought we played very well in every phases of the game. Of course I was a little surprised that we won so big, because they have a very good team, but I was mostly happy.

EA: I was not very surprised, I think we have a better team and quality than them. But it’s also true that we really had two very good days. I think we were better prepared than them for those two matches and that was displayed on the court.
H-P: Nycke, two years ago, your current team Györ became the champion just after defeating Midtjylland, your team at that time, in the semifinals. Are you specially motivated in that way for this edition of the EHF Final 4?

NG: Definitely! Last time was a good reminder of what I want to achieve and that is to win the Champions League. I was very jealous seeing Györ with the big trophy.

H-P: Duda, you were champions on that first edition but last year you were out of the Final 4, I guess this should be an extra motivation for the team this year…

EA: Indeed, we’re all hungry for a victory. The entire season comes down to this weekend, so we hope to show out best on the court.
H-P: Nycke, what do you think could be the key to lift the trophy this time? What would that mean to you?

NG: We need to play well for the 60 minutes in both games and everybody needs to be at their best.

EA: I’m just happy for being able to play handball again, and even more for having been recognized for this, it’s a prove that all of the sacrifice I made was really worth it.

H-P: You will face the reigning champion Buducnost in the semifinals. You have won one game and lost the second one in the Main Round. So, what can we expect from this third game?

NG: It’s going to be a whole other game. Both teams are close of winning the Champions League, so I believe both teams are extra motivated.

EA: I think we can expect a very tough match, with excellent defences on both ends. I think the result will be decided in details. Ambros (Martin) is preparing us in the best way possible and I feel we’re ready for this confrontation.

H-P: Would you have prefered to face another team on the semifinals?
EA: No, at this stage every team is worthy of the place they have earned and have the power to win whatever match they have ahead. In this type of event you don’t choose a rival, you just have to focus to beat whatever comes.

H-P: Which one do you think is the main weapon of the Montenegrin side?

NG: Their strong defense of course.

H-P: have read from many that this season Györ has more surprisingly weapons than Buducnost, do you agree with that statement?

H-P: If you could bench a player from Buducnost, which one would you exclude?

NG: Tough choice, but then I would bench Neagu.

H-P: Finally, for you, the teams who are going to play the final on Sunday are…
EA: Of course I believe that Györ will be there, and the other team, I can’t really tell. Maybe Vardar have been playing better than CSM Bucuresti lately. But regardless of who the other team will be, we’ll do our best to take the trophy.