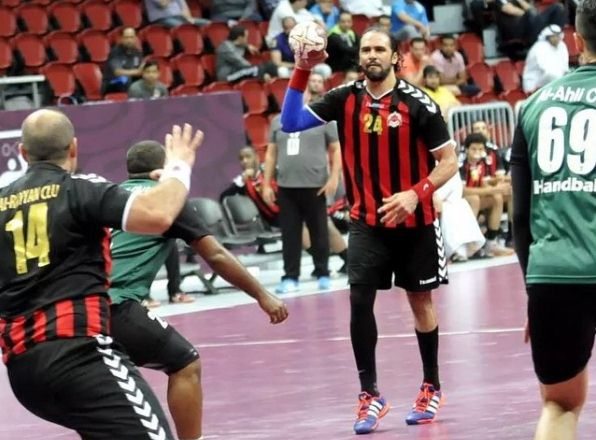 Before the beginning of an interview, in the pleasant atmosphere of a caffe close to Al Ahli Dubai training hall, we have noticed legendary Egiptian player Hussain Zaki speaking with the fans all around the world in three languages: his native Arabic, English and Spanish. „People still recognize me“, he says.

Popularity of Zaki is not a mistery: by many handball experts, Zaki is regarded as the all-time best Egyptian and African handball player. After more than 600 games for different selections of the Egypt national team, three Olympic Games appearances, numerous titles with Zamalek, Ciudad Real, Zaragoza and Al Ahli, the player with most trophies in the history of Egyptian handball, in the exclusive interview for Handball Planet, resumes his career, reveals plans for the future and talks about development of handball:

HP: You were witness and participant in the biggest successes of the African handball till now. Are the national teams from Africa finally ready to reach the top level?

HZ: The teams and players need to take things more professionally, especially in Africa. They do not reach the top level, although there are very good preconditions for development. Experience is a key word: in Africa most of the players play in the local leagues, where they do not get so many top games. Even if they have strong games, they play against each other. Egyptian players rarely play in Europe. In the moment of Egypt biggest success, I was the only player with European club experience; all others played for local clubs. However, we, as a national team, spent lot of time abroad, playing matches against top selections and teams all around Europe.

HP: What should be done then?

HZ: Egyptian players should use chance to play outside Middle East and North Africa, although language bareer is an additional challenge, because players from Egypt mostly do not speak German or French. You could see importance of this on the 2015 World Championship: Egypt had very good games against Sweden, Germany, France, but in the last minutes they lost. Players did not have experience playing on top level and they could not manage to do something new or different in the last five minutes. The only solution I see, if Egypt has ambition to become top team, is to start quickly and to let many players to go to the best European leagues and clubs. Now some of them, such as Ahmed El Ahmar or Ali Zein, are finally getting it.

HP: Are there some success examples for this recipe?

HZ: Look at Slovenian national team: now they play very well, because their players are all around Europe in top leagues and clubs and the coach can utilize their experience in the national team. Look at El Ahmar: he spent only 6 months in Germany, and he brought his game to the next level. Can you imagine how strong Egypt could be if more players get such experience?

HP: There is strong rivalry between Egypt and Tunisia. The rivalry is obvious between the national teams, between the clubs… Is this good for development of African handball?

HZ: Absolutely! It gives opportunity for players to play with full power. There is a new generation and both Egypt and Tunisia have good teams now. Egypt is the champion of Africa, Tunisia qualified for the Olympic games, they have beaten Macedonia… And the rivalry is always there. For example, one of my best friends is famous Tunisian player Walid Ben Amor. We might be friends, but, if I play against him in the national team, I forget our friendship and fight against him.

HP: And what about other African countries?

HZ: Africa needs more strong national teams. This could develop handball and bring it up. Other countries do not have spirit to try to reach level of Egypt and Tunisia. However, Angola should not be underestimated. They have very good potential and good players, although they still feel that Egypt and Tunisia are ahead of them. I would like to work with them in the future.

HP: You know the situation in the Asian handball as well…

HZ: Up to certain point, Asia is facing the same issue like Africa: more strong teams are needed. Qatar, with foreign-born players in the national team, is dominant; in the second slot are Bahrain, Saudi Arabia and Iran, and then UAE, Oman, Kuwait, if they get back, behind them. Japan and Korea have different phylosophy of handball – trend of fast handball are good for them. I would like to see their clubs competing on the Asian club championship again. However, international experience is a key for success both for African and Asian national teams and players.

HP: You put accent on experience. Today, there are videos, new technologies…everything is public now…

HZ: Watching videos and live experience can not be compared. For example, if you see a world class player like Karabatic only on the TV, you will be afraid and you will think he is much better than you. But if you play number of friendly or competitive games against that player, you lose your fear and you can do your best in the top games. You see his moves, you are in contact and duels, you feel his game. It is not same like when you just watch the video. Handball is matter of feeling and how you use 40×20 pitch. In-game experience can not be seen or felt through the videos.

HP: Your best games were against top players and goalkeepers…

HZ: Yes, I especially liked playing against Omeyer. He is a great goalkeeper, one of the best ever. This is again related to the experience: I played many times against him, I know what is he doing, how he stands… In our last game I scored 12 goals against him. People were congratulating, but it was normal for me, as I knew him.

HP: In general, how would you assess your career?

HZ: I am really satisfied. I won many trophies, hold many records, travelled troughout the world…

HP: What are your plans for the future?

HZ: I would like to be a coach. I played in different countries, trained with coaches from many schools of handball and I need to transfer my experience to the people in Africa and, above all, in my country. I am not talking about national teams only: I want to teach players how to train, how to play. Handball is not only matter of training: there are many things outside the pitch, even more than inside the hall. Players need to learn from their childhood how to study handball, how to understand it, how to feel the game. This is a precondition for the good national teams and clubs in the future.

HP: It seems you want to stay fully in handball…

HZ: Handball is my life, and even more than this. It is my only job: I do not feel like a businessman, like manager. I feel 100% as a handball person. Somehow, it seems to me everybody who played handball is inflicted with it for life. I know many former players who made business or money, but who were missing handball and then returned to it. Now I need to study, to become a good coach and then to work with players to teach them to live handball. I know it will be very hard, but I need to fight. And I know I will succeed.