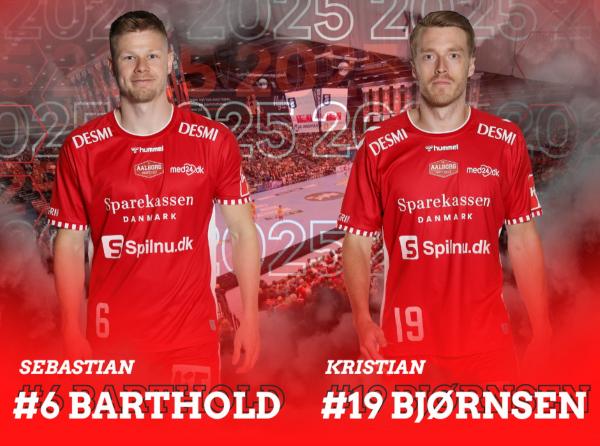 Aalborg Handball extends the contract with the Norwegian wing duo, Sebastian Barthold and Kristian Bjørnsen, so that both now run until 30 June 2025.

Sebastian Barthold joined the club in 2017 and has ever since partnered with Buster Juul on the left wing. Here, at the time of writing, it has already become 234 games and over 800 goals in the red shirt. He therefore takes part in the Danish championships in 2019, 2020 and 2021 as well as several titles in the Santander Cup and Super Cup.

The left wing previously had a contract until 2024 and is therefore adding another year to that.

– I am incredibly happy to extend my agreement with the club. I’ve already been here for five years and it’s crazy how much has happened in that time. I still feel that we are getting better day by day, and I am happy that I will now be here for at least three more years and win even more titles with the club, says Sebastian Barthold.

Kristian Bjørnsen on the right wing, who is Barthold’s brother-in-law, follows suit. After five years in the Bundesliga, he switched to Aalborg Handball in 2021 on a 3-year contract – and this has also been extended by a year, so that both Norwegians can so far be found in Aalborg until 2025.

In just over a year, he has already secured two Super Cup titles and a cup title, but Bjørnsen is comfortable in Aalborg and is certainly not finished winning titles with Aalborg Handball.

– I think the first year in Aalborg has been fantastic. Both my family and I feel comfortable, and it was therefore not a difficult decision to extend the agreement – and then I still need to try to win the Danish championship. With that support and this team, it could already be suitable this season, says Kristian Bjørnsen.

– We are incredibly proud that both Bjørnsen and Barthold have extended their agreements. Both on and off the field, they make a big difference, and it is fantastic that they both want to stay in Aalborg Handball for the next several years, concludes director Jan Larsen.