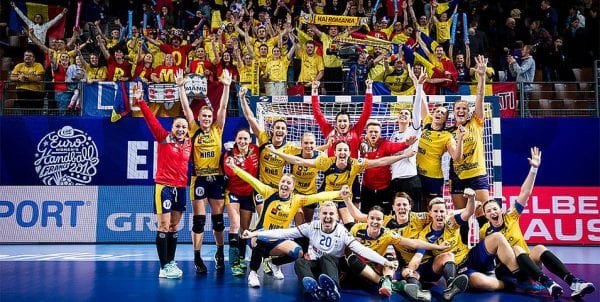 Impressions from the Spanish coach and Norwegian left back Veronica Kristiansen after the surprising triumph of the Romanian squad in the last match of group D in Brest.

Ambros Martin was possibly the man with the biggest smile in Brest Arena last night. His team outplayed Norway in great fashion, and that is not something many people can say. The Romanian squad played as a team, with a clear leader in Cristina Neagu, who was literally unstoppable and scored 11 goals, but also with an impressive Yuliya Dumanska who saved 44% of the shots she received.

The Spaniard did not hide his feelings in the mixed zone after the match: “We are happy about the game today. It was a good game. There were no other options if we wanted to beat Norway, we needed to play in this level. And to play in this level is very important to believe, and to believe that we can do it like a team, and this is probably the key, because the fighting and the motivation, we have it. What’s also really important is that the defense played in the highest level, stressed all the opponents as much as possible, and then our goalkeepers are also doing a great job behind”.

Consulted about the bulky goal difference, Martin was very rational: “We don’t care exactly about the difference. Sometimes to get such a difference is not good because it can create some confussion during the match, for example on the first half (we had a big difference) and we started the second half with problems, because of the difference. And also looking into the future, we just take two points and we have to forget about the difference, but not about the way we did it, and try to focus on this, on the things that let us play in this level and beat all of these three teams in the preliminary round”.

Regarding the upcoming matches, Martin sounded a bit concerned about the physical shape in which the team will arrive: “We go (to Nancy) to win the first match that we’ll play. It will be tough because Netherlands plays very similar to Norway, they try to speed up the game all the time, so we need to make a super game again. But we have the lack of physical shape, because many players played a lot and this something we have to count. But I hope that our mind and our motivation supply this physical problem”.

When asked about whether he was surprised about Norway’s performance, the 4 time Champions League champion stressed: “I prefer to say that we played a good match and forced them not to play in their level, but of course if you want to beat Norway you have to play in this level. It’s also important to say that they’re missing important players for this tournament and some others came to this tournament not in the best shape because of some problems they carried. But I think today not only we deserved to win, but we played to win and we got it (the victory) in the way that we wanted to, creating problems to the offense and to a team that is used to playing a speedy game”.

Behind one of the many recorders that surrounded the coach came a question from the Norwegian media: “What is it like to have the world’s greatest player in the team, Neagu?”

Martin: “Having Neagu is amazing, it’s important, but we already had her in the previous championships but the difference now is that we play as a team, I can tell you that all players are having important roles and taking important responsibilities inside the team. I would also like to say, because it’s very important, and the players know this, that the players who don’t play much are also doing a fantastic jobs in the trainings and that puts the level of the training very high and that’s better for the others”.

On the opposite side of happiness stood Veronica Kristiansen. Norway’s left back was visibly sad but made her effort to declare. “We knew how Romania would attack us, with Neagu and Pintea, but we couldn’t figure it out in defense today. She (Neagu) scored 11 goals, I think, and she’s a world class player, but we weren’t good in defense today. It’s of course frustrating (to loose) and now we have to depend on other games and we have to win our next three matches”.

HP: It’s the first time in years that Norway faces this situation, how do you think you’re gonna figure it out and handle it?

VK: “I don’t know. Now the team, and me, we have to sleep on it a little bit and talk about the game, but tomorrow and the next day I think the whole team will have a little hope again”.

While it may not be her natural position on court, Kristiansen has shown assertiveness on the right back, trying to cover up for two of Norway’s biggest absences, Nora Mørk and Amanda Kurtovic: “I played right back when I played in Denmark and now in Győr a little bit, so I feel confident there, of course I’m trying to do my best. But we’re playing with another system, we have to play to something else with three right-handed in the back positions, so we’re trying to figure it out that way”.