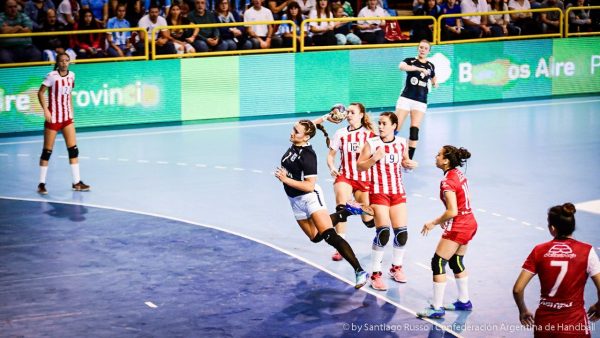 Argentina qualified for Germany 2017 after beating Paraguay on home soil by 29-19 in the second semifinal of the day. The strong performance, on a packed stadium, also granted the local team a pass to the final of the tournament where they will face defending champions Brazil.

The setting couldn’t have been better. A jammed stadium was eager to see the home team reach the final of the tournament and, most importantly, obtain the qualification for the World Championship that will be held in December in Germany. And Argentina did not let down. The first minutes of the match were very equal and Paraguay was hurting the home team with a very fast one against one on the right side with Fernand Insfrán Mora, who punished three times from the six meters line. But the speed of the conducted by Neri Rubén Vera was soon controlled by the opposing defence.

After a few first minutes, in which the match was very equal, Argentina took control pulling out a very mobile and effective attack and an intense defence that helped them steal some balls and run the fast breaks to get away on the scoreboard. Despite the good result on the first half, the bad news was the injury suffered by line player and team captain Antonela Mena, who torn her knee after teammate Luciana Mendoza fell over her, after being pushed by a Paraguayan defender. Although a diagnosis has not yet been determined it looked like a severe injury that will leave her out of the final this afternoon.

The first half finished 15-9 in favor of the Argentinians. After Mena’s injury, Rocío Campigli walked onto the court and made a mess in the Paraguayan defence. With a tally of 9 goals she was the top scorer of the match and helped her team brilliantly both in attack and in defence. The second half saw both teams rotating their formations, thinking of today’s matches. A final score of 29-19 was the consequence of a great performance from Argentina in front of their crowd, while Paraguay had already started to save some energies to fight for the last available spot for Germany 2017.

One of the youngest players of the Argentinian squad, Rosario Urban, expressed after the match: “We were expecting a much tighter match, but we were very sharp the entire match, and very tough in defence, which was one of the keys for us; and from then on, we built the attacks, which is probably what costs us the most, if we compare both phases. But we’re happy for having been able to pull out such a big goal gap, to rotate the team in a semifinal where everyone had participation, and enjoying this atmosphere”. Regarding Mena’s injury and how they managed her absence, the right wing said: “I hope her injury is not severe. Rocío (Campigli) made a great job today replacing her, I think today they’re both in a great level, but I really hope her injury is not too bad”.

“I think tomorrow’s final will be very, very exciting. We really have to fight a lot to be at their level, they’re simply incredible and have been playing in great fashion for a while. We have to make a great defence, according to what they propose, according to what we propose against them as well, but I think it will be a very good match. And it will be a great experience”, reflected the recent Spain champion with Atlético Guardés, who also took her time to try and sink in the response of the people this past week: “This is something I have never lived before and it’s simply wonderful to hear the people chanting your name, screaming for every defence and for every goal”.

Regarding the lost of their captain and main defensive player, the Argentinian coach confessed: “It is very likely that we make a change in the squad, she’ll have to be examined, but she’s in a lot of pain so it wouldn’t be ok to risk her even if the exams go well. About Campigli, I don’t think there’s much to say, she’s had a very impressive tournament so far, she’s been extremely effective, she’s defended very well, ran the fast breaks, she’s done it all”.

Today’s final will be at 16:15hs (local time). Brazil will step on court to chase their tenth Pan American title while Argentina will fight to obtain their second, after their first triump in Santiago de Chile 2009. The third place match between Uruguay and Paraguay (14:00hs local time) will determine the last qualified for Germany 2017. Also, Chile and Dominican Republic will play for the 7th place (9:30hs local time) while United States and Puerto Rico will try to finish 5th in the tournament (11:30hs local time) Links to all matches can be found here: http://panamhandball.org/pathf/2017/05/16/livestreaming/