Both candidates firmly at the top in #BuenosAires2017 | Handball Planet 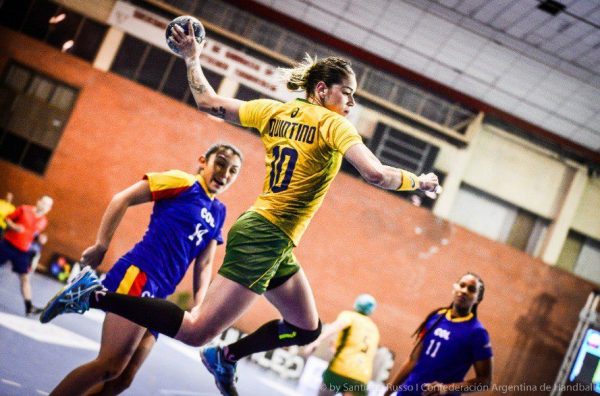 Argentina and Brazil stand alone at the top of groups B and A respectively. Two victories in two matches for the main candidates of the tournament.

Argentina made their second presentation on the 2017 Pan American Championship and did not let down their public, after they conquered their second victory, this time by 43-9 against Dominican Republic. On a cold Buenos Aires afternoon, the conducted by Eduardo Peruchena started off well and, unlike yesterday, they did not show any hints of deconcentration. After only 4 minutes of play the scoreboard showed a 5-0 in favor of the South Americans, who took advantage of the lost balls of their oponents to run the fastbreaks. The first half finished with a overwhelming 21-4 for the locals.

The repeated 2’ suspensions were a problem for the Caribbean team that showed some tough love to the Argies. The home team proved to be too much for the visitors who had trouble in both areas and were able to score only 9 goals in the entire encounter. One of the responsibles for this low scoring was goalkeeper Nadia Bordon, who made her comeback to an international tournament after three years: “At the beginning I was very nervous, of course, but this is what I’ve been waiting for the past few years and I really enjoyed. I felt really good and I’m very happy, of course. Our goal is to reach the final and we’re enjoying it as a team, and you can really tell that”.

Regarding the ambience in the hall and the integration of all of the younger players, the former player of the Icelandic Fram expressed: “I love to play in this atmosphere, the people are very supportive, we’re receiving lots of messages and we’re enjoying this moment. The good thing is that all of the younger girls are not very conscious about what they’re doing here, in a good way, they’re crazy. I don’t think they’re quite aware of what they’re generating, most of them already have fans, but they’re handling this whole situation very graciously and we’re all feeling good about that”.

On the last match of the day, with an even colder weather, the Brazilians took an easy victory against a very unexperienced Colombian team and finished with a score of 12-46. The current Pan American champions had no problems to beat the Colombians who, nevertheless, showed a fighting spirit regardless of their limitations. In fact, one of the best players of the first half turned out to be the Colombian goalkeeper María Estrada Castaño, who denied several attempts from the Brazilians to avoid an even greater gap at the end of the first period which finished with a score of 7-20.

On the second half Brazil kept on outplaying the team coached by Mónica Ospina Orozco, who kept on having problems to handle the ball and to stop the fast breaks; they reached the 46 goals and became the top scoring team of the day. “Our team is going through a renewal process so these matches are good for us because they allow everyone to have their minutes on court, to catch rythm, improve our collective game and to put into practise all of the things we’ve been training: a different defence, a more aggresive one, to improve our fastbreaks”, expressed Odense’s right wing Jéssica Quintino after the match.

She also remarked the importance of the ‘blending’ process with the newer players: “I think is very important that the more experienced players are helping the girls who are coming, we’re passing all of our experience to them and the group is very tight, very together, it’s a nice group we’re forming”. Regarding the fact that all of the rivals have been quite easy for Brazil, she reflected that “it’s a bit difficult to keep the focus because our concentration drops a little, we’re used to playing matches with a much higher intensity, so one of our goals is to keep our focus, also because the weather is quite cold so it’s difficult to enter the game when you’re on the bench. Our main goal is to reach the final and leave the tournament undefeated”.

After the second day, the top scorer of the tournament is the Brazilian right wing Mariana Costa with 15 goals, followed by Argentina’s Camila Bonazzola and Guatemala’s Militza Lavarreda with 14.

Today’s matches will be the following (local time):

They can all be watched online through this site: http://www.tycsportsplay.com/eventos.php?id=17