Brazilian athletes speak out: "the president has ceased to comply with his role as leader" | Handball Planet 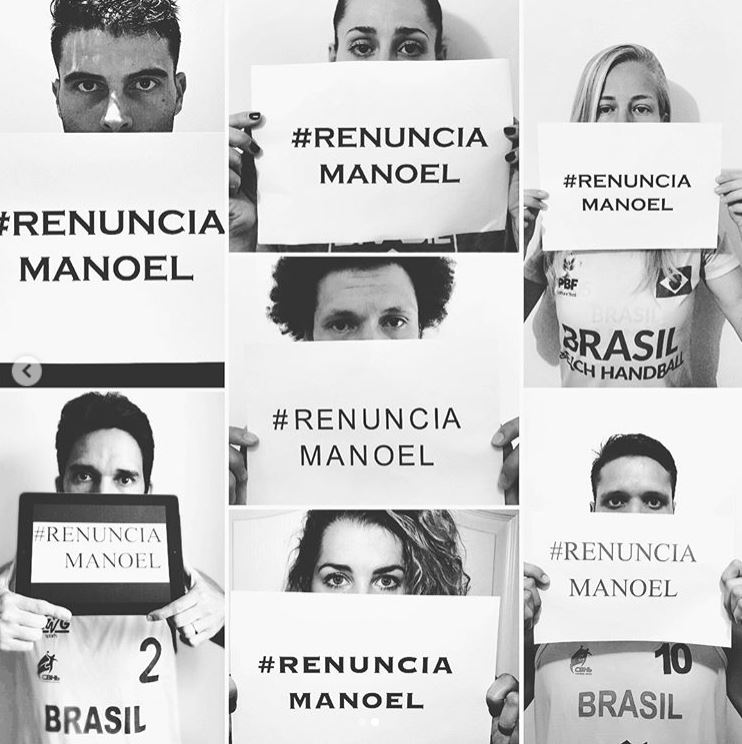 The phrase is an excerpt from the letter sent to the president of the Confederation last Monday (full translation below). In conversation with Handball-Planet.com, Bárbara Arenhart expressed her fears: “The development of handball in Brazil is Jeopardized”.

The captain of the Brazilian women’s national team and one of Brazil’s biggest names in handball, Bárbara Arenhart, spoke with Handball-Planet.com and explained the reasons of the concern that have brought along the news that the CBHb’s main sponsor will not renew the agreement, which ends in May of this year.

World Champion in 2013 and best goalkeeper of the tournament, Arenhart is part of a team that has made history in handball not only in her country, but worldwide. The 31-year-old goalkeeper is one of the players who signed the letter sent on Monday to the CBHb, in which they request the resignation of the confederation’s president, who’s been in charge for 28 years and is currently facing charges for “practice of simulations, falsehoods (ideological and material), overbilling and payment for services not rendered” by the Federal Justice of his country. But before it all exploded and derived into that request, the athletes had signed and shared an open letter in which they express their wish to continue to strive for the national team, regardless of the political and economic problems.

“The exit of our main sponsor is very sad and serious news, that we only knew last week. Not only the national teams will suffer from this loss, but the sport in general. We’re in the middle of an Olympic cycle and we have many competitions of great importance, both international and continental, for the qualification for Tokyo 2020. Without this sponsor, not only the development of handball in Brazil, but also these competitions and preparations are jeopardized”.

Handball-Planet.com: In the letter signed by all Brazilian handball athletes last week you talk about the desolation you’re feeling, what was the objective of the publication?

BA: The objective was to express our concern with the situation our sport is going through and to make clear the fact that we, as players, will continue to give our all for our it, and that we need the supporters by our side in the construction of our dreams, as their accompaniment is extremely important for the realization of those dreams. We also decided to make it public because we would like people in general, from handball fans to institutions, to understand that without any support our future is jeopardized. We won’t have the conditions to continue the development of the sport in Brazil and we won’t have the continuity of work necessary to make sure Brazilian handball remains among the best in the world, something took us quite a while to achieve.

HP: Were you notified of any cancellations for this year, such as tournaments or concentrations?

BA: As of now, we only know that we will take part of the South American Games, but we have not been notified of anything else yet. What is really worrying is the difficulty it will represent to meet all the set activities without the help of a sponsor. Already in December of last year the men’s national team had a concentration cancelled, despite the fact that it had been confirmed and that there was still a sponsor. Meanwhile we trust that everyone involved with handball in our country are fighting together to revert this situation and manage to meet all of our goals.

In said letter, the athletes wrote: “Meanwhile, the efforts and sacrifices of the athletes and technical teams to achieve all of our successes obtained so far are much bigger than the President or that the institution itself (CBHb). In view of this, we would like handball to be valued for the work of these people, for their greatness and for their immense potential for growth. We would like everyone who works with handball to be respected and encouraged to continue building this project of great value for the national sport”.

One of the athletes who also signed the new letter published on Monday, requesting the resignation of the president is Bruno Carlos de Oliveira, head of the athletes’ commission of the CBHb and a beach handball national team referent. If there are athletes who’ve been suffering with this situation (lack of budget) for a while, those are the beach handball teams, both senior and youth. Regarding this new context, the four time World champion expressed: “The situation (for beach handball) is the same or maybe even worse, because our sport is on its way to becoming an Olympic discipline, and that’s why the management assigns the greater portion of the budget for indoor, so we do not count with the necessary support. It happened last year ahead of the World Games, for which we had to make funding campaigns on the internet to finally travel*. Also the youth national teams lost their chances to be on the Youth Olympics Games of this year in Buenos Aires (beach handball was included on the YOG programme).

*both men and women went on to become champions at the World Games.

HP: What is the situation for the senior teams ahead of the World Championship in Russia?

BO: As of today we’re in a situation of total uncertainty, we still don’t know if we’ll have the budget to cover trainings and the competition. We are, and will always be, training hard to face any situation that comes ahead.

HP: You are the head of the athletes’ commission, how did the conversation with the rest of the athletes go and how did you make the decision to write the letter?

BO: We from the athletes’ commission are in constant contact, and we have a large number of athletes who are on a WhatsApp group, which allows us to debate about the thoughts of the majority of the players. The decision came from a generalized feeling of the athletes, so all of our decisions were taken as a group, listening to all of the exposed opinions.

This is the translated version of the letter sent to the president of the CBHb:

The athlete’s commission, subscribed below, together with all of the athletes from our sport, hereby request the presentation of resignation from the President Mr. Manoel Luiz de Oliveira. We are not satisfied with the management and lately, we’ve only seen the image of handball being related solely to judicial matters. resulting in the loss of sponsors and credibility, instead of seeing our sporting successes.

As can be seen in a public and notorious way, the Brazilian Handball Confederation, under the management of the President -who has been in charge for 28 consecutive years- is in imminent risk of serious damage to its members due to questions related to the alleged improbity administrative and judicial decisions. In the face of these events, us the athletes, are invaded by a forced feeling of extreme consternation and anguish regarding the future of our beloved sport.

The resignation is important, as it unlinks the name Manoel Luiz de Oliveira -which is being judicially accused- from the Confederation and, consequently, from the athletes, coaches, referees, professors, students and people involved who are part and depend directly or indirectly from it. This measure is important foremost because, due to the problems that have taken him to his removal, Manoel is unable to represent the wishes of those who build handball, because we are dissatisfied with his positions and because he has ceased to comply with his role as leader of the entity.

It is with full awareness that Brazilian handball needs restructuring and a new plan to recover our growing path and regain credibility with our sponsors, particularly BANCO DO BRASIL, that we request the IMMEDIATE RESIGNATION OF THE PRESIDENT MR. MANOEL LUIZ DE OLIVEIRA.”