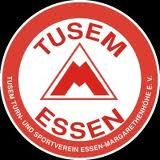 Very few would have believed before the game that TuSEM Essen would have any chance in Wetzlar, a team that has been in terrific form lately winning many top games. However, with the new coach change, there might be a chance for Essen if we’re to judge by tonights performance. The team from Essen took an important point in Wetzlar, and might definitely mean a huge boost of confidence in the team ahead of the next game. Wetzlar had 5 goals advantage with two minutes to go, but with two goals Essen makes it bearable 17-14 for Wetzlar at half. In the second half TuSEM gets to 18:18 in the 37th minute and from this point on a goal-for-goal game occurs, with Essen even taking the lead 32:32 in the 57th minute. Wetzlar takes the lead back with 45 seconds to go, and with Pieczkowski‘s goal 4 seconds before the whistle, TuSEM make it 33:33. Their first point in the season.