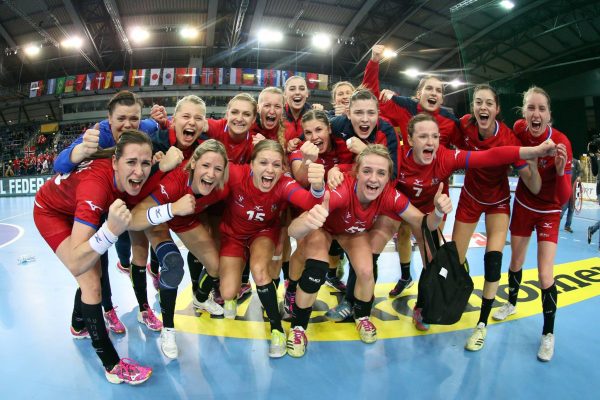 The Czech Republic has added yet another brilliant achievement on this World Championship after defeating Romania in the eight finals in Leipzig Arena by 27-28 and proceeding to the quarter-finals. They will now face Netherlands, who beat Japan 24-26 in extra time.

“This was the biggest match of my career”, expressed Markéta Jeřábková in press conference after the match in which she and her team defeated Denmark’s 2015 bronze medallists, Romania. Today’s victory against the team of the World’s best player did not come easy for this resilient and hard working Czech squad, but it was exactly because of those two characteristics that they took the victory.

The coached by Jan Bašný came to Leipzig with nothing to loose and fought until the very last minutes of the match, in which they took the victory from the Romanian hands. The coached by Ambros Martin were leading, but couldn’t quite escape in the scoreboard. After 23 minutes, they were leading 14-9, but they could not hold on to that 5 goal difference, despite the great performance from IHF World Player of the Year, Cristina Neagu, who scored 8 goals on the first half alone. The first 30 minutes finished with a favorable 17-14 for the Romanians.

The lead continued to be for the ones commanded by Neagu, but with a little bit less than two minutes before the final whistle, Jeřábková put the Czechs ahead for the first time in the match (25-26). A quick reply came from Melinda Geiger, but a penalty committed by Valentina Ardean Elisei (which cost her a 2 minute suspension) gave Czech Republic the chance to take the lead again. Petra Manakova scored from the 7 meters line and a few moments later Neagu did the same on the opposite area (her 13th goal) to even the match. But the last posession was for the Czech, and with one more player on the court, they managed to give the last ball to Michaela Hrbkova, who scored the winning goal for a final score of 27-28.

“This is very fantastic, it’s very emotional. We were focused on this match, we believed that we could win this and we proved it”, said a visibly emotional Markéta Jeřábková after the match. “For our team, the dream came true to make it into the best 8 teams in the world, and for me personally it was the best game of my career, full of emotions, full of good moments, full of hard moments, but with but with a successful end, and I hope that we will do everything to make it to the final weekend”, continued.

“We have to congratulate the Czech Republic today because they played a very smart game, they also never gave up when they were under in the score all the time, and they used the last minute to lead. For us this situation was really tough, totally the opposite from the previous games we played in the group round. It was a pity today, our players tried everything, we were overmotivated to do a fantastic job again today, and in the moment we saw we couldn’t scape in the scoreboard I think the nerves and this wish to be in the next round was tougher than use, together with how well they played in these moments”.

“I want to congratulate my players for their attitude the entire match. Our plan was to keep fighting against this great team of Romania and we tried to close the gap in the score and we did it in the very last moments. I knew that this team had a great mental strenght to break through and I’m really happy for my players”, said Jan Bašný, who made history along with his squad.

The Czech Republic will now face Netherlands in the quarter-finals.