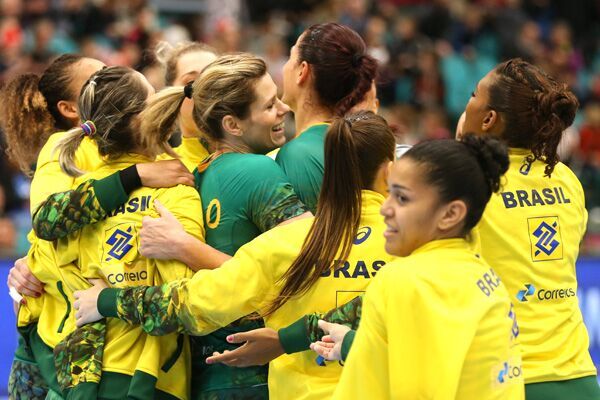 Brazil had a harsh time this afternoon against classic rival Argentina, but they finally secured a victory for 23-19 and a spot on the knockout stage. They will decide the top of the group tomorrow against France.

Argentina-Brazil is one of those classic rivalries you don’t want to miss, no matter what sport it is. Today, current World Champions and the third qualified from Pan America, faced on their fourth match of group C and the level displayed by the Argentinians really impressed everyone in Sydbank Arena.

The match started a bit imprecise in attack from both sides, but with defences working well on the other end of the court. Brazil committed too many technical mistakes that led Argentina to lead the on the scoreboard for 6-7 after the first 20’, when Morten Soubak called a TO. The effect was immediate as the Pan American champions reacted and changed the score for a 11-8 on their favour by the end of the first period.

The second half was as equal as the first, with Argentina trailing, but never far away on the score. The final result was decided close to the end of the second half, when Brazil was able to take off and create a four goal difference that would keep until the dying seconds. Deonise Fachinello was chosen best player of the match, she helped the team with 7 goals, while Manuela Pizzo was top scorer for Argentina with 6 goals.

Words from the players/coaches:

Morten Soubak :“We’re happy for the victory; the most important thing today was to qualify for the next round and we did it. It was a tough game, Argentina did a good job. It was an interesting match and we knew it would be difficult. Today’s match shows that they’re re getting better. I hope tomorrow’s match (against France) will be exciting. We know it’s going to be a very physical match. It’s the third time we will meet France in the last four WC. We’re both very fit teams and it will be a tough game. We have played a friendly against them recently and it was very equalized, so we expect a difficult match.”

Eduarda Amorim played her last game against Argentina in 2013 in a South American championship in Argentina, and from then one, according to her, there was an evident evolution: “They always play their best against Brazil, I think that the rivalry pushes them to that. They played very well today and I think they could have a future on the international scene; they continue to evolve, every time I see them they have a better quality and have improved their skills. It’s always nice to play against them, it feels nice to beat them as well (laughs), but now we have to think about France.

Luciana Mendoza (ARG): “Despite the loss, this is a very good result for us, we know Brazil is the current World Champion so we knew it was going to be a tough match, but we’re happy. We promised ourselves that we wouldn’t repeat what happened against Germany, we didn’t want to lose like that day. We wanted to go play by play. For us every World Championship is a great experience and every defence and attack is important for our improvement and experience”.