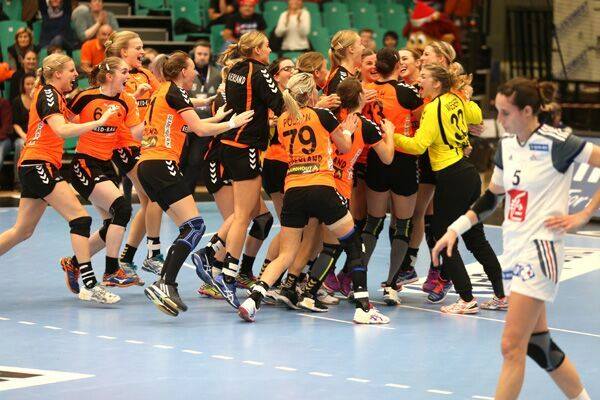 The Netherlands have made history and qualified to the semi-finals of the World Championship for the first time after a 28-25 victory over France. The conducted by Henk Groener had a great match against the tough team conducted by Portes, they dominated from beginning to end with a great attitude in defence and a very patient game in attack.

The match was exciting from the start; seven goals had been scored after the first four minutes: 4-3 for the Orange team. Allison Pineau led the French, together with the Gnonsiane Niombla. Tess Wester was certainly one of the highest points for Netherlands, saving 56% of the shots on the first half, while on the other end of the court, Nycke Groot and Yvette Broch converted 4 goals each to reach the end of the half leading 15-12.

France was not able to overcome the result on the second half, which had an unstoppable Estavana Polman (7 goals, top scorer with 10 goals in total). A change under the posts brought some fresh air for France and Laura Glauser finished with 6 saves out of 12 shots, but they were not enough to stop the Dutch, who were making things look easy against the powerful French team. The difference was never shorter than two goals and the result was never in danger for the new semi-finalists.

Just like in Serbia 2013, France was kicked out of the semi-finals; and on the other hand this will be the Netherlands’ first time among the best four teams in a World Championship. “We stood very good together. Our defence was very strong again and Tess was very good on the goal, I’m very happy. I got a little nervous (when France got close on the second half) but we kept our head cool, we played with the clock and didn’t make any dumb mistakes, we were smart”, expressed Nycke Groot after the match. The MVP was goalkeeper Wester, who finished with an impressive 48% of saves.

The Netherlands will face Poland in the semi-finals in Herning, on Friday at 18hs.