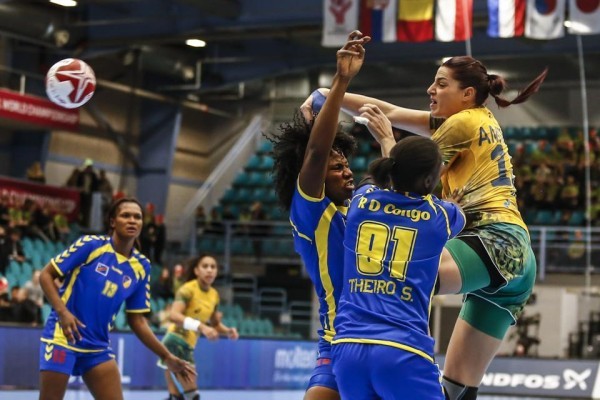 Brazil is en route for the eight-finals after defeating the Democratic Republic of Congo by 11-26. In a match that was uneven from the start, the defending World champions displayed their signature game by defending tough and taking fast breaks, but also playing with a lot patience against a very inexperienced but physically strong team.

By the 10th minute of the first half, coach Mpoua Nkua Celestin had already called the first time out, when the team was 1-6 down on the scoreboard. The strong and neat Brazilian defence was too tough for the African team, which was able to score only 4 goals by the end of the first half (4-14).

The second half was very similar to the first one, with the South American defending and running to the goal. The captain Fabiana Diniz expressed her happiness after the match: “We’re relieved now, we were a bit worried before the match, because this could have been a tricky game. When you think it’s an easy one, you can make easy things complicated, but we were able to pull through”.

Morten Soubak made the entire team step on court for at least a few minutes. Diniz thinks this rotation might be important for the upcoming games: “It’s good that all players can play, because in that way, when you need them for the important matches, they will have the confidence to perform well, it won’t feel like a debut and that’s crucial”.

Brazil’s next match on this group C will be Germany, tomorrow at 20.30hs. “They’re a tall team that plays good handball. We can’t be fooled by their debut against France because the first match in a World Championship is always hard; it was for us against South Korea. We’ll try play at our best and get the two points”, finalized Diniz.