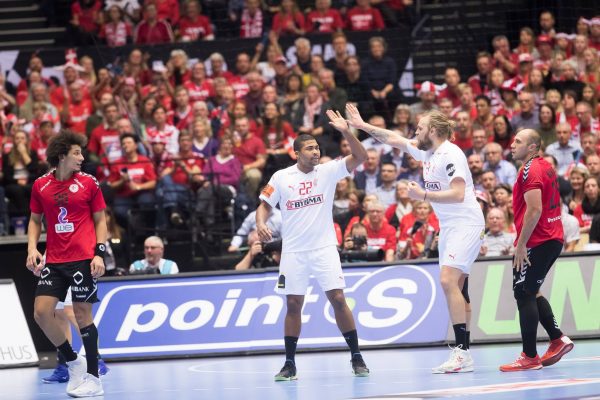 In a packed Jyske Bank Boxen, Denmark had to work hard to take the two points against a resilient Egyptian team. It was 20-26 for the co-hosts who are now very close to reach the semifinals of the World Championship.

It was definitely not a walk in the park for Denmark last night. Despite the cheers from the supporters that filled the Jyske Bank Boxen in Herning, the locals struggled until they finally set the final difference in the match. Egypt took the advantage first and were leading 3-1 after 4 minutes, and pressing Denmark with a deep defense, particularly against Mikkel Hansen.

A goal by Mads Mensah from long range, a save by Niklas Landin and a goal by Magnus Landin put Denmark 3-3 after 7:30 minutes. While Egypt was defending well, the coached by Nicolaj Jacobsen took the lead for the first time on the 12th minute, through Landin (5-6), after his older brother Niklas saved a ball from Eslam Eissa. The match was too tight now and the defensa set up by the Africans was proving effective as the Danish found it hard to score. Eventually, they were able to keep that slight advantage and finished the first half leading 7-9.

At the beginning of the second half, Nikolaj Øris slammed a 9-meter shot on the right post of the goal defended by Mohamed Eltayar (finished the first half with a 40% of saves, 6/15) to set a three-goal difference for the second time in the match (7-10). And while it looked like the Danes were going to escape on the scoreboard, the team commanded by David Davis fought back and after 7 minutes they caught up to 11-12, mostly thanks to the shots from long range from Omar Hagag, who scored twice in a row.

The Egyptian defense continued to be active and really teased the Danish attack who were trying to find the goals from with connections with the line player. The Africans took advantage of some good moments from Ali Zeinelabedin, who scored 4 goals in a row for his team on the second half, the last of them to put Egypt 17-20 with 10 minutes left to be played. But from the other area, it was Anders Zachariassen who was hurting from the 6-meter line and who would later be named player of the match.

With the difficulties presented by the Egyptian defense, Jacobsen resolved to play attacks with 7 against 6, and they paid off. In those last ten minutes of the match, a 3-6 partial for the Danes secured the victory with a final score of 20-26 that placed them on top of the group with 8 points.

PSG left back Mikkel Hansen broke down the reasons for the victory against the Africans: “It surprised us a little bit that they defended that offensive, we had a bit of a problem with it on the first half, but we managed to win the game through a very good defense, and I would say on the second half we succeeded with the 7 against 6 in attack and that decided the game for us”.

HP: What are the expectations for Wednesday’s clash against Sweden?

MH: “It’s going to be a tough game, a great game between two big teams who really want to go to the semifinals. It’s obviously going to be a huge battle between two teams who hate to lose to the neighbors, and hopefully we can use our home advantage with the audience and come out here with a good attitude, the attitude of a winner. We need to be much more ready for the game”.

HP: How tough will it be to have played 8 matches in 14 days?

MH: “Well, of course it’s tough, but I mean, we’re all used to it, it’s not the first time we’ve done this, it’s not the first time we’re in this situation to play for a place in the semifinals so I hope everybody is experienced enough to know how to get the maximum energy for the game against Sweden, because we need everything, we need everything before a game like this”.