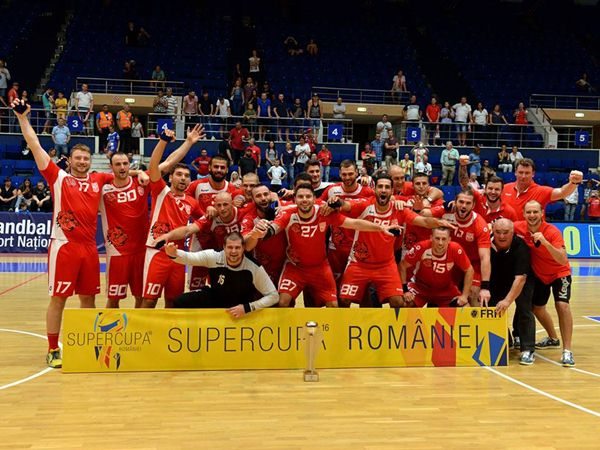 The new season of the Romanian Men’s Handball League started with another clash between DINAMO Bucharest and CSM Bucharest, the two strongest teams in the championship.

DINAMO – last season champions and CSM – holders the Romanian Cup faced each other again in the first thriller of the new season: The Supercup ! One more time, DINAMO came up victorious and put a new cupin their trophy room: 29-25 (15-9).

“The Red Bulldogs”started the game very strong and after 12 minutes they were leading 7-1. After this shock, CSM defended better and reduced the score on the board, but the end of the first half belonged to DINAMO with some killer fastbreaks and the team in red finished the first part of the game with 6 goals ahead: 15-9.

DINAMO began the second half storming through the defense of CSM and the difference grew to 9 goals: 21-12 in39th minute. “The Blue Tigers” tried to get back in the game butthey were only able to cut the advantage to 3 goals: 20-23 in the 48th minute. DINAMO played smart in the last 10 minutes and won the game without emotions: 29-25.

As always. DINAMO’s Bucharest best scorer was the Croatian right back superstar JAKOV VRANKOVIC with 8 goals, while for CSM Bucharest, French left back GUILLAUME SAURINA, a new comer to the team, also finished the game with 8 goals.