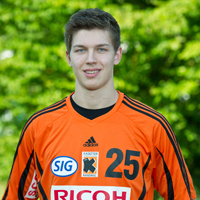 Christian Dissinger, one of the most prosperous German players, had misfortune right after signing for Kadetten last season. In the match against Barcelona he slipped, got injured, and had to be out for about nine months. Now he is finally back after recovering, and already played some minutes in the Swiss Championship match against Kriens, and is now waiting for the Champions League opener against the team he had the misfortune – FC Barcelona.