EHF Euro 2018: The Dutch get the bronze in Paris | Handball Planet 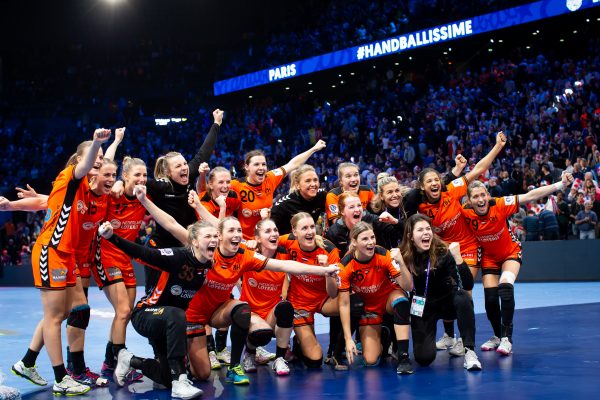 Netherlands have won the bronze medal of the EHF Euro 2018 after beating Romania 20-24 and obtained their second consecutive European medal after Sweden 2016 silver. Lois Abbingh was named best player of the match, Estavana Polman was top scorer with 7 goals.

It was the match neither team wanted to play upon arriving in Paris. But after the respective loses, there’s not much to do but to stand up and fight again. And that’s what Netherlands and Romania did this afternoon in the AccorHotels Arena in Paris. After 12’, the match was 3-3, but a 0-4 run from the Dutch allowed the to tak the lead and at 17’, they were leading 3-7. Romania could not find the goal on a first half that saw Tess Wester with a fine saving rate (she would finish the match with a 41% of saves).

The first period was 8-15 in favor for the team conducted by Helle Thomsen, whose squad only had 15 players, as Jessy Kramer and Martine Smeets were not able to play due to the injuries suffered during the semifinal against France two days ago. On the second half, Romania showed the fighting spirit that brought them to Paris in the first place. With Cristina Neagu watching from the stands, the coached by Ambros Martin caught up on the scoreboard and after 5 unanswered goals, they were only three goals behind (18-21), but the 8 minutes left were not enough to at least tie the match.

The Dutch collected their second European medal after the silver they won in Sweden 2016.