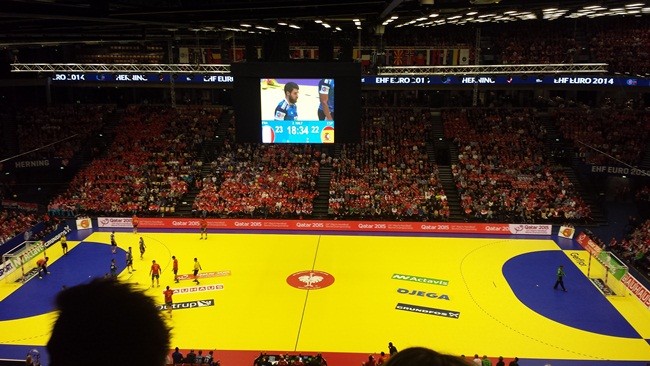 The EHF EURO 2014 in Denmark has been a great success in terms of hosting the event. The focus on handball in Denmark and the focus on Denmark in the World of Handball have been immense.

Jean Brihault on Denmark as a host: “They have been great hosts. The organisation has been really precise and at the same time friendly. The volunteers are all very helpful and very enthusiastic. They are not just fulfilling a duty, they are enjoying themselves, and this makes the difference. I would say that the atmosphere here in the Box (Jyske Bank Boxen in Herning) has been incredible. It seems that this thing “The Box” which was also the name of the Olympic venue (The Copper Box in London) is good for handball.

Per Bertelsen, president of the Danish Handball Association, DHF: “After having digested the defeat against France we can say we are proud of the silver medals. And we are proud of the Euro2014 on home ground. We are humble by the many, many that followed handball in Jyske Bank Boxen and watching it on TV. We got world class support. Danish handball was in focus nationally and internationally. We owe a big thank to players, spectators, volunteers, host cities and Sport Event Denmark. Without this fine cooperation we had not been able to achieve what we did.”

“We can already see that we will get a good profit from this event. We should use this to enhance the conditions for handball in the local clubs in order to retain and recruit players.”

Sport Event Denmark – the national sport event organisation – is also more than satisfied with the EURO2014:

Lars Lundov, CEO, Sport Event Denmark: “Throughout the tournament the Danish team gave us great experiences at home ground even if they lost to France in the final. And it has been a memorable journey – from the bid to the staging of the event. Denmark was awarded the event with the vote 24-22 – the least possible margin – against a strong joint bid from Croatia /Hungary back in 2010. DHF together with the host cities proved that Denmark was a good choice. Events like this showcase Denmark as a sport event nation. The transfer of knowledge will be activated in relation to not only future handball championships in Denmark – IHF Women’s World Championships 2015 and IHF Men’s World Championship 2019 – but also other international sports events that are in the pipeline.”

Sport Event Denmark will finance and coordinate an economic impact analysis of the EURO2014, but some facts are:

Public Danish Interest: Every Dane of three years and above spent on average eight hours and eight minutes in front of the TV watching the EURO2014. This is the highest TV-consumption at European Championships ever.

Likes on Danish facebook fanpage for the national team: 210,000 https://www.facebook.com/haandboldherrern