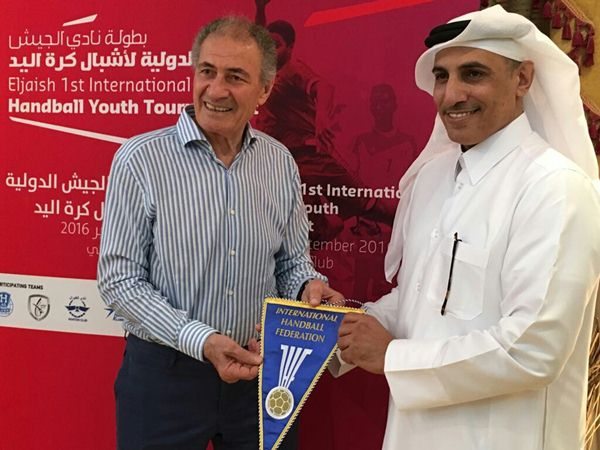 The leading force in Qatari handball and the most powerful non-European handball team, El Jaish Sports Club, keep high level in the previous years. After Rio’s Olympics, Spanish coach Toni Gerona can count on the players which was taken by Valero Rivera in the Olympic project, which was mainly based on Jaish’s members. That makes El Jaish Sports Club even stronger with Markovic, Stojanovic, Cappote, etc. However, in Jaish Sports Club think about future with their own school. During the IHF Super Globe 2016, the first youth international tournament was held in their organization. About that and all the interesting topics Handball-Planet.com talked with El Jaish Sports Club president Khalid Saif Al Kuwari:

– Idea was born two years ago. We wanted to organize it during World Championship 2015, but then realized that would be difficult as all the people are busy with the senior tournament, so it was re-scheduled for 2016. IHF Super Globe looks like nice chance for those who want to follow it, to come and find out what is now handball in Qatar. That isn’t only senior national team. We have all youth categories in same level as in Europe. We got permission only two months before the tournament, so that wasn’t enough period to make stronger and bigger event as we couldn’t call all the teams we wanted. However, we succeed, teams are satisfied, we will prepare everything on time for the next year. We want to make big tournament with 12 or maybe even 16 teams worldwide. Who wants to come is more than welcome.

How many players you have in youth categories?

– About 150, the most of all other teams. We have two European coaches in the club. Our mission is to produce players for the future of Qatari handball.  We have plans and programs for all youth categories, going on Camps in Europe, trying to educate our coaches on worldwide courses. That will give results in the future.

– It’s not easy to repeat this success, even we have our NT players again in the team. We wish at least two trophies which is based on fact that we have good coach, management and players. We will fight for all the trophies, but our major rivals will be Lekhwya, Al Rayyan and Al Quiada, who are reinforced with some new guys.

El Jaish weren’t part of the IHF Super Globe 2016 even you could be only real threath to European TOP teams.

-We wanted, we tried with Qatar Handball Federation and IHF to get wild-card, but it wasn’t easy. We hope to compete in 2017.

Rules say that clubs can sign two foreign players for the upcoming season 2016/2017. You have Issam Tej…

– Until now, we didn’t take second player. We are still searching.

GERONA IS THE “PERFECT ONE”

How do you satisfied with Spanish coach Toni Gerona?

– He is the perfect one. He will become one of the best coaches of the world. His mentality is different, we have trust in him, players also, thanks God that we found him. I hope he will stay with us and sign new two or three-years contract.

One of the heroes of the last season was Serbian goalkeeper Darko Stanic.

– Oh (smile). It is difficult to describe him. I heard a lot of bad things about him before he came to Doha, that he is „crazy“, etc, but he was an example of a real athlete. He was so happy here, and we were with him, as we didn’t put him strict barriers and try to work with him in psychological way. My wish was that Darko stays with us, but Federation’s rule doesn’t allow to sign proffesional player on the position where you have NT member, and we have Goran Stojanovic between the posts.

Is handball community in Qatar satisfied with NT result in Rio 2016?

– Federation invested a lot in that team. National team has players from all the teams almost year and a half before Olympic tournament. Main problem, in my opinion, was a lack of matches, as they played only nine friendly matches in one year. They haven’t been with their teams at all. And, choice of some players for Rio weren’t good. Some important players stayed at home. A lot of people aren’t happy with final result. But, that happens in handball. A real test for this team will be World Championship 2017 in France. They have been second in Qatar, eighth in Rio, France will give us an answer.

How you can describe situation in Qatari handball after Qatar 2015 in all the aspects, mainly financial…

– It is difficult, everything is so quite after Qatar 2015, and that was the reason for us to make this youth tournament. To raise awareness, to motivate people. World Championship helped a lot in that way. We have no financial problems as all the teams get support. Handball the most together with football, but I can say that we didn’t use 2015 as we wished –concludes Kuwari.