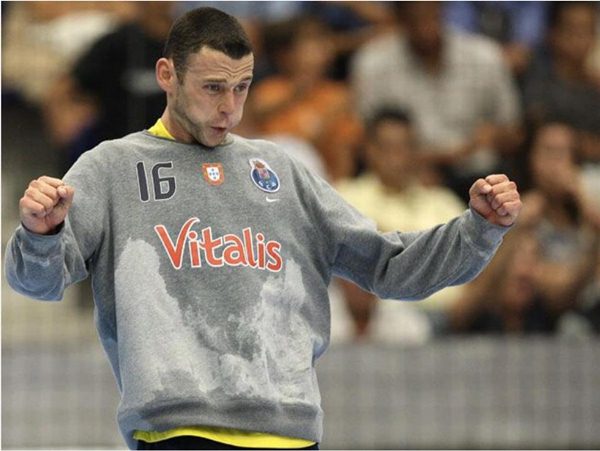 Two wins in opening three matches of the VELUX EHF Champions League Group C, put FC Porto on the third place with nice perspective to make best result in the European elite competiton so far. The hero of the first away victory in Novi Sad against RK Vojvodina 27:23 was Portuguese goalkeeper Hugo Laurentino (31) with 18 saves which pushed his team toward success:

– It was a very good game that FC Porto conquer, mainly in the first 50 minutes. We did everything as planed and you managed to beat the strengths of Vojvodina. In the last 10 minutes of game our team were not focused but we managed to get the victory, that was our purpose.  FC Porto goal in the group phase is to qualify in the first two, we know that is difficult because all the teams are very qualify and high level so we have to win all of our games in Dragão Caixa, our home and win two or three games playing out. So, we’ll always travel with the expectation of winning while playing out, we had to take this opportunity – says Laurentino for Handball-Planet.com.

How far can go Porto this season in EHF CL?

-The main goal it’s to qualify in the first two places and reach the next phase. After that we just wanna go as further as possible.

Who will be the most serious rivals for the TOP 2 places?

– The group is very balanced, but at this stage I have to say Meshkov Brest that hasn’t lost any game. But then you have Naturhouse La Rioja who’s tied with us and Checkhovskie Medvedi who can fight for the first two places.

You changed the coach after many years. What is legacy of Obradovic and how you see new era under new coach Ricardo Costa?

-Ljubomir Obradovic brought to FC Porto an mentality and vision that was lacking in Portuguese Handball and we has able to apply that vision in FC Porto and then all the other teams start to paying more attencion and applying themselves, so we brought chances for Portuguese Handball. He start betting in the younger player and after a while they start to be wanted by other teams. But now it’s a new era, Obradovic left a number of good things and Ricardo Costa, avail what Obradovic left and improves with is own vision. Ricardo Costa worked directly with Obradovic for two years, he as a great knowledge of the team and it just made easier for his  and our adaptation.

Will you still be unbeatable in Portugal, and who are the most serious rivals to put you out of the throne after many years?

-FC Porto as 7 years of domain and I sure hope that we still keep that going. Last season Sporting CP went to the finals against us and they made good reinforcement of their team. And then you have SL Benfica that is always fighting for the title. I belive that’s the three teams qith more chances to win the title – concludes Hugo Laurentino.