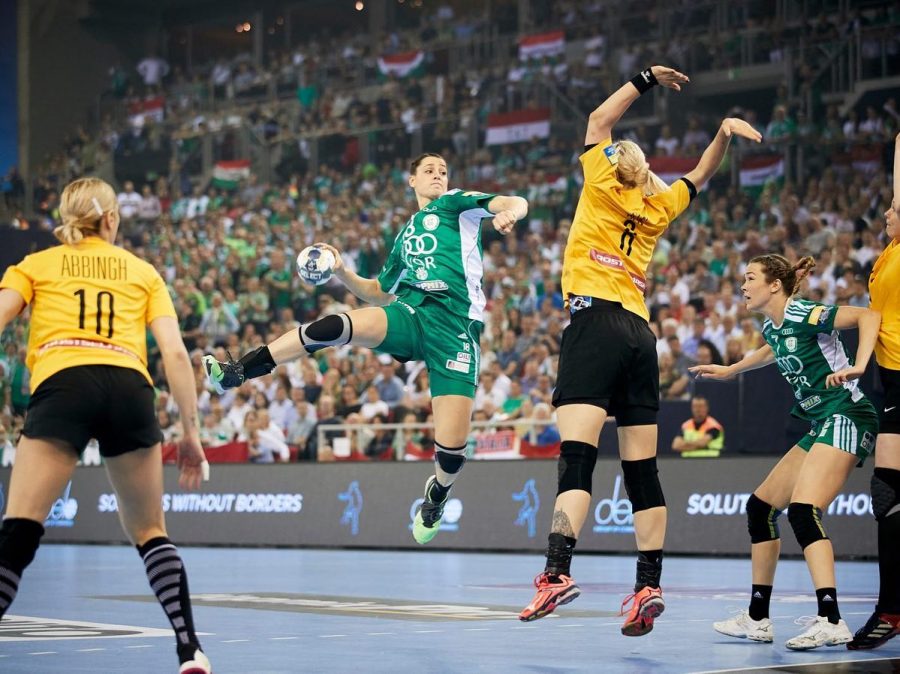 In the much expected DELO Women’s EHF Final 4 final, Győri Audi ETO KC defeated Rostov Don 24-25 and lifted their 5th trophy in the history of the club. Nycke Groot, who was sent off with a red card at the beginning of the second half, became the top scorer in the history of the tournament. Kari Aalvik Grimsbø, was named MVP.

It was a highly expected final the one disputed yesterday at the Papp Laszlo Sportárena in Budapest between the defending champions Győri Audi ETO KC and Russian champions Rostov Don. Spanish coach Ambros Martin, now sitting on the bench of the girls in yellow, was probably the only one who knew every little secret from the Hungarian powerhouse, but as he reflected yesterday, his team arrived to this last match with a few less hours of rest and a much tougher game on their backs (or bodies, rather).

A fast-paced handball was displayed from both sides since the early beginnings of the match. Just like in last year’s final, Eduarda Amorim was the one who opened the score. But in less than 30 seconds, Russian star Anna Vyakhireva tied the match and set the tone for the final. The brilliant right back did not get special attention like on the semifinal, when she was closely followed nearly the entire match, so she had some space to start her own plays or assist Kseniya Makeeva, one of her best associates on this final.

After a very frenetic 10 minutes, Rostov Don managed to put themselves 7-5 ahead. A lob from the 7-meter line from Anita Görbicz lifted the spirits of Győr fans in the Arena and on the following play, Bernadett Bodi lobbed it again from the right wing to tie the match; but two hammers from Lois Abbingh put the Russian squad ahead again and Gabor Danyi decided to give a chance in goal to Kari Grimsbø.

A powerful standing shot goal from Anna Sen put Rostov 10-8 ahead after nearly 20 minutes of the first half, and that was the last time that the team commanded by Martin would be in the lead. Five uncontested goals in the last five minutes put Győr ahead 11-15 at the end of the first period, and the first crucial appearances from Grimsbø were vital for to remain goalless.

The beginning of the second half was marked by the disqualification of Nycke Groot after only 6 minutes of play. On a Rostov fast break, she committed a hard foul on Polina Kuznetsova, who had already won the position, and after a TV review, she was shown the red card; this was Groot’s last action with the green jersey in an international competition as she’s set to leave for Odense next season. Goals from Abbingh and Makeeva put Rostov as close as 15-18, but when it seemed that they were getting closer, Győr made sure they didn’t feel so comfortable.

The Hungarians kept a 4-goal distance until the 22nd minute of the last half, through Amorim’s 7th goal (21-25), which would be the last goal of her team until the very end of the match. Rostov came back. The last few minutes were frenetic, just like the beginning of the encounter.

24-25 and with 20” remaining, Danyi called out the last timeout. “No shoot, keep the ball”, he told his players. Regardless of the instructions, Stine Oftedal bounced her way to the area and shot to goal from an uncomfortable angle on the right side of the court. 11 seconds left and Rostov played that fast break, Lois Abbingh got a chance but Grimsbø stretched down and saved the shot with her right foot to unleash the celebrations for the defending champions. Amorim and Abbingh were top scorers of the match with 7 goals each.

Despite the huge effort, Rostov were not able to dethrone the now five-time champions of the top European competition. Grimsbø, who was named MVP, finished the match with a 38% of saves. This was Győr’s fifth title and both Görbicz and Amorim with are the only ones who were part of the team in all five titles. The match was also the last international match with the Hungarian club for Nora Mørk and Crina Pintea, who will play for CSM Bucuresti on the following season, and Zsuzana Tomori, who will move to Siófok.