Vipers on the podium of European handball | Handball Planet 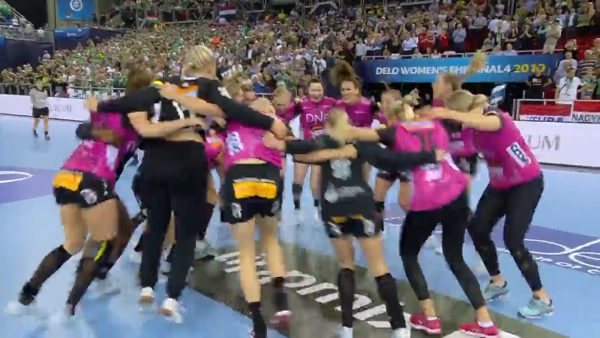 Vipers Kristiansand defeated Metz Handball 30-31 on a very exciting match for the third place on the DELO Women’s EHF Final 4. The Norwegians made it to the podium of European handball in their second EHFCL appearance and their first Final 4.

It was an electrifying match, from beginning until the very end. Vipers took the lead first, and after 7 minutes, they were 1-4 ahead. Linn Jørum Sulland became the tournament’s top scorer after scoring her second goal of the match on the 9th minute (81, she would later score a total of 10), surpassing Noemi Háfra and Jovanka Radicevic, who finished with 80 each.

Xenia Smits tied the scoreboard on 6 after 12 minutes, and from then on, the match would become nail-biting, a goal exchange in which the teams took turns to take the lead. Two minutes later, Beatrice Edwige scored to put Metz 8-6 ahead and on that scoring situation, Katrine Lunde suffered what looked like a serious knee injury, after landing on her left knee in an attempt to save the shot. The legendary 39-year-old Norwegian goalkeeper was stretched out of the court and received a standing ovation by the entire Papp Laszlo Sportarena. 21-year-old Eline Fagerheim took her place.

The match continued to be very hectic, Vipers took a 2-goal lead with 7 minutes left to be played, but Metz came back and put themselves back on track. With only 30 seconds left on the clock, Henny Reistad scored to tie 15-15, but Astride N’Gouan put the French team ahead with only a few seconds for the final buzzer (16-15).

On the second half, Metz stepped on the gas pedal from the very beginning and with less than one minute played, they were leading 18-15. After Smits’ third goal of the match, that established the 23-20 on the 11th minute, the match would not have such a goal gap again. Manon Houette suffered what seemed to be a muscular injury on the posterior part of her right leg while running a fast break, and left the court in pain after 13 minutes.

Sulland continued to score, both from long range as well as from the 7-meter line, and that kept Vipers in the match, while Zaadi, Smits and Edwige were the driving force for the French side. Young Fagerheim, who didn’t have any minutes on court on the semifinal, had a very good performance since she stepped on court and made some crucial saves, especially on the second half, which helped Vipers stay in the match despite having lost the legendary Lunde.

While it looked like Metz had the edge on the dying minutes, 20-year-old Reistad scored for 29-30 with a minute and a half left on the clock. Metz committed an attacking foul on their possession and on the other end, Sulland scored her 10th goal and put a 2 goal difference with only 40” left for the final. Flippes scored the last goal of the match for a final 30-31.

Vipers Kristiansand took bronze on their first appearance on the DELO Women’s EHF Final 4, while Metz finished on 4th place. With her 10 goals, Sulland reached the top of the top scorers list with a total of 89 on the entire competition.