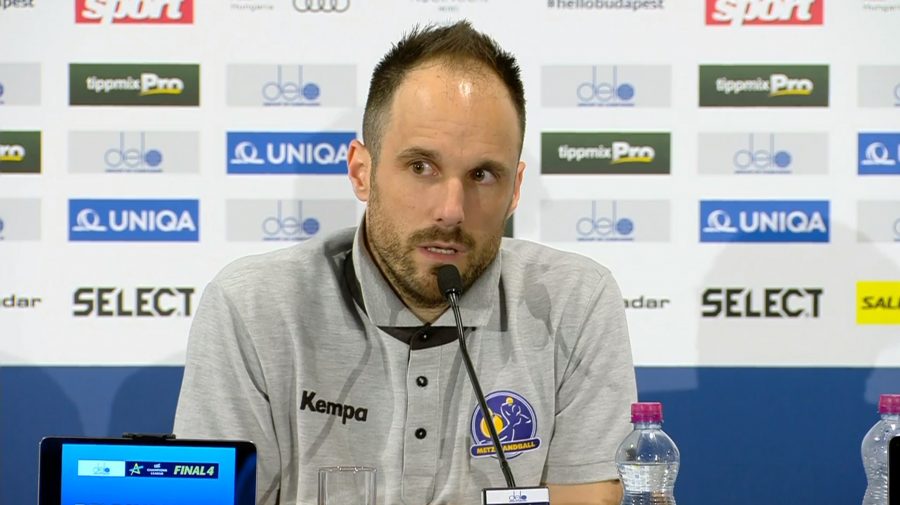 While Metz Handball may have been thought of as underdogs ahead of their DELO Women’s EHF Final 4 debut, coach Emmanuel Mayonnade and captain Grace Zaadi didn’t see themselves as such. The French coach looked visibly upset on the press conference and expressed his thoughts on the match and the lost possibilities during the 60 minutes of an exciting match.

“I want to congratulate Rostov, they were in front from beginning to end. And to the fans of handball, I’m sorry, because what we showed today was not worthy of the quality of handball that we showed from the beginning of the year”, started the French coach, and continued: “I’m not sure why we did this, we did things we hadn’t done so far, took shots we had never taken. Maybe this is the strength of the big teams, we suffered situations that we thought we were prepared for, but we couldn’t handle it. On the first half we missed in the moments in which we could’ve come back in the game, moments that were crucial, but their goalkeeper was at a 53% save rate, and even though we had some easy chances, we couldn’t score because of Sedoykina”.

Mayonnade also reflected on the second half, in which Metz showed its best version: “On the second half, it was different. Before the match I thought Metz was the best team in Europe, but apparently today was better. We thought we could come back and we really fought for it, but unfortunately we couldn’t. The balance changed, slowly, we thought we had a chance, but in the end we couldn’t come back entirely. I’m really sad now, truly sad, for me, for my captain, for us; we thought we could make it but we managed to play well only 30 minutes. Tomorrow we’ll be back and fight hard, it will not be a like a friendly game for us, we’ll do whatever we can because I cannot imagine having to accept to lose two days in a row. Hopefully, we’ll win and we’ll be able to come back next year”.

On the other side of the table sat Ambros Martin, a man accustomed to being in that spot. He praised his players and recognized the effort made by Metz on a second half that was close to becoming an epic comeback. “This is amazing, for the players, the club, the fans, and especially because in front we had Metz, who did fantastic during the whole season, especially after Christmas. My team was really well prepared and learned from the two games we lost against them, without any chances. This week was incredibly good for our side, for how we worked and how we simulated this tough game on trainings, this made us play like angels, especially on the first half. We controlled all of the situations through the defense, we knew what they were doing all the time before they did it and we were able to play the fast breaks. Also, the positional attack was working really well, with patience, moving the ball, looking for the best chance to score, we made a complete game”.

The Spanish coach continued: “On the second half, not because of the difference, but because wanted to push and wanted to turn back the score, we couldn’t control that 5-1 on Vyakhireva. We missed some clear chances that made them get confidence to play fast breaks and was much more tough. But I think they key of everything of this match and before was that we really believed, and trusted and had the confidence to never give up, it was a fantastic job from the team, and the team work allowed us to be on the final for the first time”.

For team captain Grace Zaadi, the result was certainly not the expected one, and she did not blame it on this being their first appearance on the big stage in Budapest: “I’m very sad that we were unable to qualify to the final in our first Final 4. At no time I, or rather the team, prepared for this match as debutants, we had a good season throughout the entire Champions League and I wouldn’t like to blame this on the lack of experience. Rostov played very well, especially on the first half, when they made us play against ourselves and stopped everything we were trying to do”.

The French centre-back finished with a strong statement and the message that they did not travel to the Hungarian capital just to enjoy the experience: “I’m proud of the second half we did, it shows that we played with our guts and we really showed how we can play, the way we did the entire season. But this it, this is handball, life goes on and we’ll continue to work hard to come back next season”:

When asked about her thoughts when she stopped the penalty shot with only two minutes left and 2 goals ahead on the scoreboard, Mayssa Pessoa couldn’t quite find the words. “So many things came to my mind in just a few seconds. We had a great season and we worked really hard to be here, and those two minutes for me were everything, this match was like a final for me. So, I knew I had to take this ball to push the girls, to motivate the girls so that they could score”, she confessed.

When the floor was open for questions, there was only time for one, and Ambros Martin was the one appointed. Being the one who knew their opponents the most, he was asked what he would do to stop them. “We only focused on Metz until now. We didn’t have time to think of anything else, we were thinking of Metz, not Győr nor Vipers. We don’t have time to prepare nothing against them. What we know is that they are top class players in all positions, they have experience playing this kind of finals. On the physical aspect, today for us it was a really tough match, we couldn’t rotate so many players, for Győr it was not the same, they played the game the way they wanted, the way they can do it with a big difference and they could rotate and be more rested. Also they have more hours to rest, but we will fight. We know that they have some weak points, but it’s going to be really difficult to push them to that point, but we will try (to win). Everybody knows, and they know, that through the defense we can do a good job to make them stressed”.