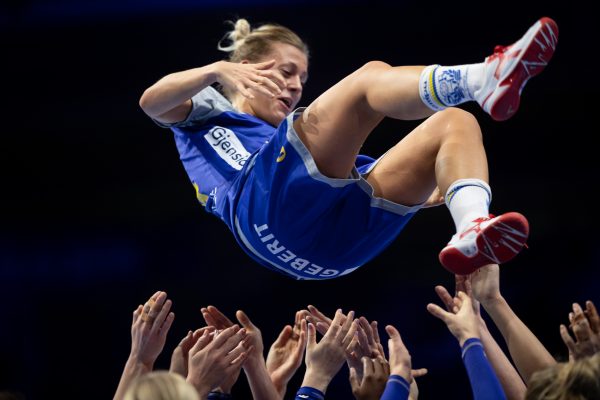 On an great team performance, Sweden sweeped off Russia 39-30 on their last game of the main round and secured a place in Paris, to fight for the 5th place. Nathalie Hagman scored 17 times and is now sharing the all-time top scorer in a single match record with Polish Karolina Kudlacz-Gloc.

It was not just another match for Sweden today. If the loss against Montenegro on the first match of the main round put them in a complicated situation, the draw against France on the second encounter gave them some hope. If they beat Olympic champions Russia, they would still be on the race for the semifinals. Montenegro’s loss to Denmark earlier on Wednesday gave them some more chances, and they would need a victory and a hand from Serbia later on against the hosts.

But Sweden didn’t think about it that much. The team coached by Henrik Signell simply stepped on court and played their best handball so far. Both teams were playing fast and although Russia scored first, Sweden turned it around and had the lead after 5 minutes. The Scandinavians managed to be ahead by 3 goals (8-5) after 11’, but Russia did not lift off the feet from the gas pedal and reached a draw 3 minutes after (11-11). In a first half plagued by goals Sweden had the upper hand at the buzzer (18-17).

On the second period, the conducted by Henrik Signell, with an astonishing Nathalie Hagman, started to pave their way to success. After only 10 minutes, the goal difference was +6 for Sweden, who were simply playing their best in the tournament, against a Russian team that was rotating their players, possibly thinking of the semifinals they will face in only two days. Sweden kept the two points and secured their place in Paris.

Hagman was chosen best player of the match, her impressive 17 goals we more than enough to earn her that award. What’s most impressive about the number of goals scored, is the number of attempts she had: 18. An astonishing 94% of efficiency, with 5 out of 5 from the 7 meter line.

Russia will play their first semifinal in 10 years and their rivals will be Romania. Sweden will face their Scandinavian neighbours from Norway on the match that will decide the 5th and 6th place of the tournament.