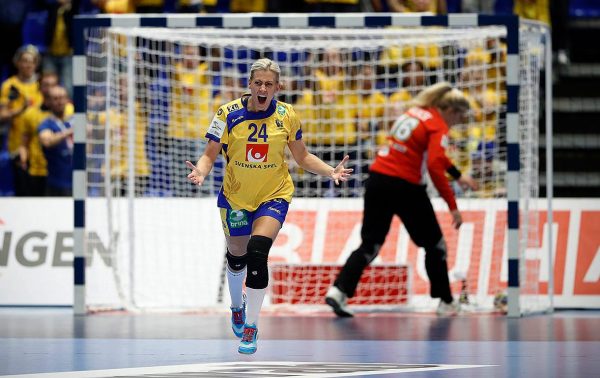 There was no other player on last night’s match between Sweden and Russia that deserved to be named player of the match than Nathalie Hagman. The Swedish right wing/back scored the astonishing sum of 17 goals, and tied Karolina Kudlacz-Gloc as the best scorer on a single match in an EHF Euro championship, a record the Polish had been holding since Sweden 2006.

The CSM Bucuresti’s left handed patiently answered every press request in the mixed zone, but she was certainly in the mood to reply: “Of course I’m really happy, first of all we won this game with 9 goals in the end and this is also really important. But also to earn this win against Russia is a nice feeling, they have a really good team, and of course they didn’t have so much to play for today but in the end we won and this is the most important thing”.

HP: What were the expectations before the match and how do you think it turned out in the end?

NH: “We made the tactics before the game and we talked about all the situations and the players, but we will always go for it, and we believe that we can beat all the teams. We have a really good team and we’re also a little up and down, but I think we can win against all the teams and we can also maybe loose everyone, but today was imporant to win these points”.

When asked if she felt proud of the performance of the team so far in the competition, Hagman doubted: “It’s OK, I think we didn’t score so many goals like we used to, we were running lots of more fast breaks and this kind of things, but in the end we played better defense in this championship and also Filippa (Idehn) in the goal played, so far, a really good championship so maybe it’s a little bit different, but we got a lot of points and of course, we were close to beating match, we lost by one against Denmark and we played a really bad game against Montenegro, but we’ll still go to Paris”.

And are you proud about your own performance so far?

When asked if today’s performance would help her gain confidence, she replied: “I don’t know, I will of course say yes, but I don’t know. I know from before that I’m a good handball player, but of course it’s also hard to not play so good and I just want to play good and help the team, so I hope I will play a better game in Paris”.