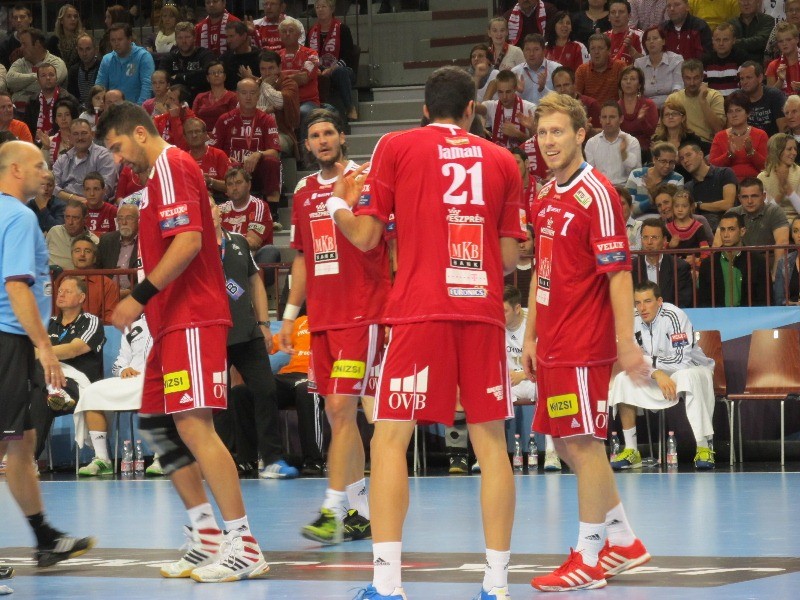 The biggest match of the Hungarian League took place on wednesday evening between hosts MKB Veszprém who finished first in their CL group, and guest and so far undefeated league leaders Pick Szeged. Even a one-goal victory would have been enough for the home team. Their first meeting in Szeged resulted in a big victory for Pick, but they later squandered their 2-point lead with a draw in Tatabánya. Pick’s task was close to impossible: to gain points in the Veszprém Arena where even THW Kiel were unable to. Veszprém had two missing players: Carlos Perez, who quit and left for Quatar, and pivot Oneto who suffered major injury earlier.

Neither side was dominant in the first 15 minutes, both defences were tight (6-5). At around the 20th minute Chema Rodriguez and Jamali came in and Veszprém lead (8-6). In a few minutes however the guest equalized thanks to acrobatic pivot play by Zubai and a goal from Larholm. Pick Szeged tried shaking up the game with a few substitutions but they were unable to score for 6 minutes, which was immediately punished by Veszprém who enjoyed all benefits of home ground. Players of the guest team and coach László Skaliczki voiced their opinion about several strange decisions by the referees, but this only provoked a 2-minute suspension. The biggest difference of the first half came at the 30th minute (13-9).

Veszprém decided the fate of the match  after a few minutes into the second half. Pick’s defence was soft, their attacks couldn’t penetrate the home side’s wall. Goals from Sulc and Prodanovic were only enough to keep the difference at 7 goals (21-14). In the remaining 20 minutes Veszprém kept their lead with Pick trying different attack variations without much success. The end result was 30-22, meaning there are no undefeated teams in the championship and Veszprém are most likely to win the regular season. Pick Szeged can try to beat their biggest domestic rival in the play-off and in the Final4 of the Hungarian Cup.