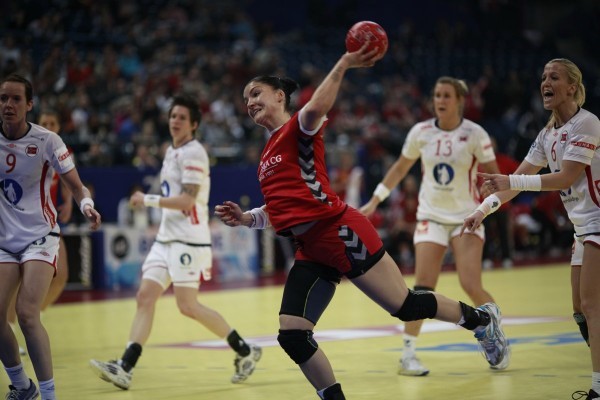 One of the possible conquerors of the cup for the greatest champion of the 2013 WC in Serbia is the current European champion – the national team of Montenegro. The best right wing of the EHF EURO 2013 and winner of the EHF Champions League with Hungarian Gyor last year, irreplaceable in the formation of team manager Dragan Adzic, Jovanka Radicevic, in the exclusive interview for serbia2013.com was talking to us about the upcoming tournament in Serbia.

You are coming back to the place of success, in Belgrade, where you won the European gold last December. What feelings do the memories from “Kombank Arena” bring?

It certainly brings back great feelings, when you know that you are going back to the arena where you won the European Championship. That was a special experience in my career. We are coming back to Belgrade as European Champions, and we are having the opportunity to have another great success in that same place.

Is the Montenegrin team better this December from the one that conquered the European crown last year?

We are an year more mature and experienced, which is very important for this competition. We have been working very hard, and now we are coming to get the results. The atmosphere is great. We have the same energy as we did before the Olympic games and EURO 2012. We are coming without much euphoria and panic. We have our path and we will be sticking to it.

The same way they all want revenge, we want victory. That is clear. We are not thinking about the medal, but our opponent, and that is Korea. After them it will be someone else. That’s the only thing we think about.

What challenges are awaiting for you in the Group A, in which aside from Montenegro, the national teams of France, Netherlands, Korea, Congo and the Dominican Republic will also play?

Surely the match against Korea will be the hardest, because it’s the first one. The first matches at the opening are the toughest both physically and psychologically, in addition to that Korea has a style different to the European one, which supports the fact that it won’t be easy. We are well prepared. Than there is the Netherlands, and France. It will be very hard to win the first place in the Group.

Who would you like to see from the Group B from Nis?

It really isn’t important to me who will be first, second or third there. There are no rules. I will give you an example. On the Olympic games in London we were fourth in our Group, and than we eliminated France in the quarterfinals, that was first in their group. At that point France was the best team on the tournament and what happened? We won, and we sent them home. It does not matter the ranking in each group, the elimination stage is what matters. You don’t have the right to a bad day or to make a mistake. You have to give your maximum in the matches from the first to the last minute. One match decides the faith, so we do not worry about the rivals. Whoever comes, let it be our guest. We will be preparing equally for each.

Last year Montenegro had a great number of fans. What kind of support do you expect now?

I am expecting a big support from the stands. We need the fans. They know they are our pillars of support, so we expect them to be with us from the beginning to the end.

Who will be on the podium on the 22nd of December?

It’s going to be a though and uncertain championship. Usually there are surprises on World Championships, but I know one. Whoever plays against us, will have a hard time – confidently ends Jovanka Radicevic