Lazarov (MKD) ahead of Swiss game: It's hard to be captain of 20 unhappy players | Handball Planet 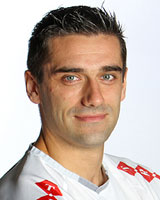 At the press-conference that the Macedonian national team held ahead of the game against Switzerland tomorrow night at 20:00, a rather unusual situation occured. The press was attended and opened by the captain Kiril Lazarov and coach Zvondo Sundovski, while the people from the handball federation were absent. The problem is, in Lazarov’s words, that the money that were promised to the players for the 5th place at the European Championship in Serbia were not yet paid, and this caused huge discomfort in the team. However, the captain assures that the players will take the game tomorrow very seriously and will give 100% in order to win and qualify for the European Championship in Denmark.

Nikola Markovski and Naumce Mojsovski will miss the game tomorrow due to injuries, while Borko Ristovski is suspended because of the game against Austria.