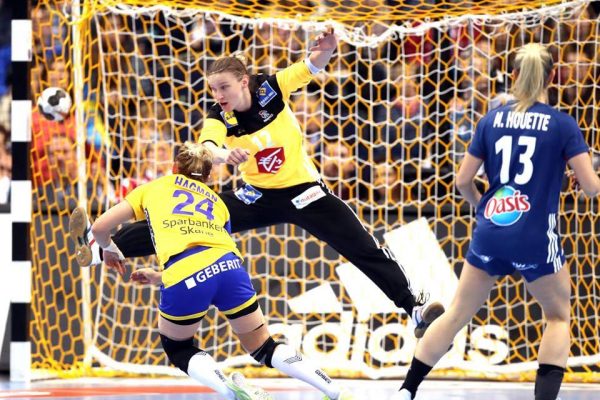 When the clock marks 17:30hs France be on court at the Barclaycard Arena in Hamburg to play the final of the World Championship against defending champions Norway. One of the reasons why they reached this stage, after six years, is the performance of it’s starting goalkeeper, Amandine Leynaud.

The ŽRK Vardar player was the MVP of the semifinal between France and Sweden. With a monstrous 40% of saves in the 60 minutes that she was on court, she helped her team reach a new World Championship final since that of Brazil 2011, in which they also faced Norway. The Aubenas-born has had a great championship and she spoke after the match that granted them the ticket for the final today.

-Amandine, it was a monster defense that of the match…

-It’s our game, our strenght. Before the game everybody said that Sweden had the best attack and that we had the best defense and we showed this tonight. We fought a lot, we took a lot of two minutes, but we were amazing when we were one player down and I think we won the game in that moment.

-Allison Pineau said in press conference that the way Norway was playing was ‘intimidating’, but that you would find a way to beat them…

-Of course we want to find a way, of course we will look how Sweden beat them. We think we are in the final and everyone can loose, and they lost already, then why not in the final? Of course they’re experienced in finals, but I really think it can be ours also if we work good, if we play good, if we are in a top level in our performance. I really think it will be a tough game.

-Do you think the key will be not to feel too much pressure?

-How can you not feel pressure when you play a final of a World Championship? I think we need to feel pressure but on the good sense, you need it to keep you in the high level. We will think about it this way, I hope all the team will feel this way and this will push us more.

-How easy is it for you to play with such defense?

-I think we understand each other. I play with an amazing defense. Beatrice Edwige and Camille Ayglon are like (she thinks), I understand how they are, you know? I know what they will do beforehand, then for me it’s more simple; but this is work. We need work on this on every training, on every game; we need to speak all the time to have a complicity and this is our job.

-Everybody talks about your defense, but what do you have to do on offense to beat Norway?