Lino Cervar: "Cautiously against Silkeborg; Metalurg is the best team from the Balkans" | Handball Planet 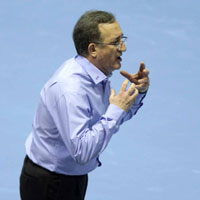 Ahead of the final group phase match that HC Metalurg will play on Sunday at home against Bjerringbro-Silkeborg, Lino Cervar held a press-conference today on which he gave short preview of what’s to be expected.

“Sunday we have a huge chance to make it happen that one Macedonian club wins a second place in a group in the Champions League, and has small advantage when the drawing for the 1/8 finals will take place. It’s a step forward compared to last year, when we were third in the group, now we are second and behind us are respectable clubs such as Gorenje Velenje, Bjerringbro-Silkeborg, Chambery… It can be said that Metalurg this year is the best club on the Balkans, and I’m glad that for second year in a row not only we are in the TOP16, but also we are the club with least goals conceded in the group stage.” – said Lino Cervar