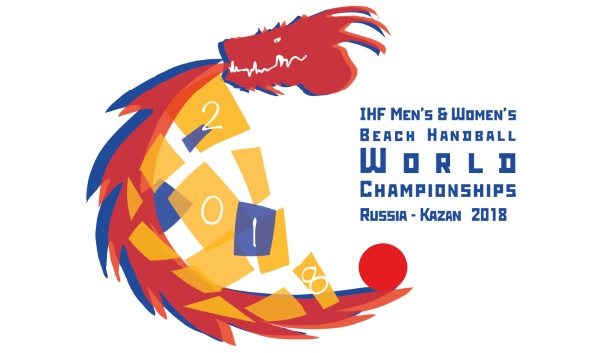 With the 2018 IHF Men’s and Women’s Beach Handball World Championships less than 150 days away preparations are heating up in the Russian host city of Kazan as it prepares to welcome the best 32 men’s and women’s teams from around the world, announced IHF.

Helping to raise awareness and support of the event, a stand-out logo and identity are crucial to the success of any tournament and Kazan 2018 have taken the first step by revealing their logo.

The colorful and distinct logo features the head of a ‘Zilant’ a legendary creature, which is somewhere between a dragon and a wyvern and which has been the official symbol of Kazan city since 1730.

In the logo, which also incorporates the year of the tournament and a beach handball itself, Zilant can be seen breathing fire – representing energy and the power of the game – over a stylised sea and sand.

Zilant has become known as the king of snakes, a powerful dragon who has legendary creative power and represents life, immortality, eternal rebirth, cosmic supernatural force, greatness, wisdom, and invincibility. He is kind to people and protects them.

The mythical creature is featured in the coat of arms of Kazan and can be seen at various points across the city, including in the metro system and through works of art. Kazan even had a handball teamed named ‘HC KAI Zilant’ who appeared in the EHF Men’s Challenge Cup in 2002/03.