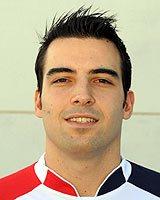 Another Spanish player could move to Hungary. The invasion’s new member is Carlos Ruesga, the middle back of Reale Ademar Leon. He met MKB Veszprém in the last 16 of EHF VELUX Champions League and made an impression in Veszprém. From next year he could replace Gábor Császár, who goes to PSG. On the 9th of June will be organized a match in honour of MKB’s legend, the 42-year-old Carlos Reinaldo Perez. Veszprém will play against an All-star team (Árpád Sterbik, Filip Jicha, Iker Romero, Ivano Balic, Nikola Karabatic, Marko Vujin, Kiril Lazarov etc.). Ruesga is also invited, after the match is expected to be the club’s official statement and the signing.