Mocsai "Junior" broke Serbian dreams: "It's about 14 players and the coach!" | Handball Planet 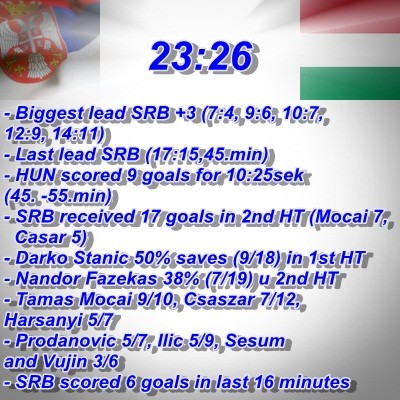 Some key facts about the match between Serbia and Hungary 23:26, after team of Lajos Mocsai has qualified for the 1/4 Finals at the Men’s Olympic Tournament in London.

Coach Veselin VUKOVIC (SRB): “In the second half we had no courage to win the game. We were very bad in defence and missed easy shots. We let in 17 goals in the second half which is never good and we didn’t have players to make it up at the other end because we had problems such as the injury to Momir ILIC. Our attack became weaker and we lost confidence and attacked with a lack of courage or assurance which cost us the quarterfinals and a historical chance but that’s life and we have to keep on going. Hungary were better than us today. Normally we are better but we lack Olympic experience. There is not much I can say to the team just now.”

Player Nikola MANOJLOVIC (SRB): “I honestly didn’t think we would lose today. At the start we showed our all. We had a few setbacks in the offence. We lost some easy balls and couldn’t get back in defence quickly enough. We set the pace of the game in the first 15 minutes as we have in all of our matches. When we are crushing we do it really hard but we don’t know how to fight when we are under pressure. Even when we were losing by just one goal it already looked like it was over and it was too hard to come back. We hope to come out of this positively. We had some really good chances. There is a new generation of younger players so we entered the Olympics in a different way and we’re sad that we couldn’t go further. We have to think realistically about the next Olympics as most of us in the squad will be in our thirties. We have to be realistic about the next games.”

Coach Lajos MOCSAI (HUN): “We are very happy. It was very hard game but it was worth it. It’s good to be one of the best teams. We reorganised the defence after the break, which was decisive. Our quarterfinal opponent Iceland is a very serious team and one of the best teams in the Olympics.”

Player Tamas MOCSAI (HUN): “It was a very important game. We knew at the start of the tournament we had to win against Korea and Serbia, so we fought hard. It was a tough match. We played good defence and we had a good counterattack. “I felt the opportunity to score in the game and because of that I started to shoot – I had some luck as well. I had a good day, a good performance and I’m happy with the way I played. But it’s not about one player; it’s about 14 players and the coaches too. Iceland play really well. In the last Olympics they got the silver and they are a great team. We need a good defence and a good goalkeeper to win.”