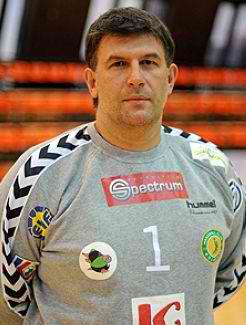 Legendary Hungarian NT goalkeeper with Serbian origin, Nenad Puljezevic (43) will join Kadetten Schaffhausen in the upcoming season. Experienced goalkeeeper finished his proffesional carrer in summer 2013 by TSV Hannover Burgdorg, began to work as a goalkeepers’ coach in Serbia, but he went back between the posts in the finish of the season in German second league member Huttenberg.

Puljezevic, who had the best part of his career as member of Hungarian Pick Szeged and Hungarian NT (before he played for Serbia and Montenegro), signed contract with Swiss champions as goalkeepers’ coach, but he will be able to re-activate himself if that would be necessary during season at VELUX EHF Champions League.

Kadetten Schaffhausen have two young goalies for the upcoming season, Portner and Maier.